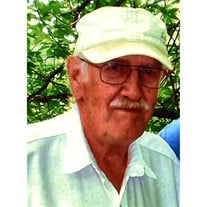 Albert Charles "AlÃ¢â‚¬Â or "LightninÃ¢â‚¬Â Carlson of Cadillac went on his final adventure August 16, 2014, the most magnificent adventure. He was born on January 7, 1935 in Cadillac and grew up in Manton and Tustin. He lived most of his life in Michigan, but also lived in and dearly loved Wyoming. Al was the biggest, toughest, smartest and sometimes meanest man the family knew. He had served his country in the United States Army and was tried and true. There were very few things he couldn't figure out or do. He taught the family about responsibility, God, God's wonderful creation, to stand up when other men would not, to do our best at a job, to distrust unions, banks, and politicians, and that his wife was the best thing that ever happened to him. Al told the family "though you might get to Heaven, don't think that God doesn't have a wood shed up thereÃ¢â‚¬Â and to always remember "you don't get to take fun over, kid.Ã¢â‚¬Â His family thinks he did his best at the latter and is probably realizing the former now. In 1960 he married the former Deanna R. Feltman and she survives him along with children: Linda Duncan of Ohio, Pete Carlson of Reed City, John (Cindy) Carlson of Luther, and Brian Carlson of Georgia; four grandchildren: Brittany, Travis, Josh and Steven; siblings: Mary Philips, Joan (Chester) Bartlette, Charles Carlson, Carol Carlson, William "WoodyÃ¢â‚¬Â (Sandy) Caldwell, Mike Carlson and Nancy O'Dell. He was preceded in death by children: Bobby and Barbie; step-daughter, Pamela Jo and a brother Wilfred "PeteÃ¢â‚¬Â , they have been waiting a while and will be glad to see him. Per Al's wishes there will be no funeral and his ashes will be liberated in the mountains of God's glory. In lieu of flowers please forward any remembrance to the family or to Mercy Hospice of Cadillac as they provided great compassion and peace of mind when it was truly needed. An online guestbook is available at www.petersonfh.com

Albert Charles "AlÃ¢â‚¬Â or "LightninÃ¢â‚¬Â Carlson of Cadillac went on his final adventure August 16, 2014, the most magnificent adventure. He was born on January 7, 1935 in Cadillac and grew up in Manton and Tustin. He lived most of his life... View Obituary & Service Information

The family of Albert Charles "Al" or "Lightnin" Carlson created this Life Tributes page to make it easy to share your memories.

Send flowers to the "Al" or "Lightnin" Carlson family.