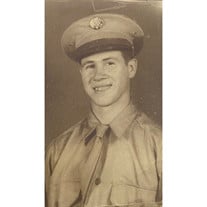 Alfred Joseph Mongar of Cadillac passed away Sunday afternoon, January 9, 2022 at his home. He was 95. Alfred was born on November 16, 1926 in Boon, Michigan to Thomas W. & Dorotha B. (Platz) Mongar. He attended school in the Cadillac area and in March of 1945 he entered the United States Army and served until discharged in late November. Then in April of 1948 he reenlisted in the Army and served another 4 years during the Korean War. After his service to his country he returned home and was employed at B.F. Goodrich for 5 years and then at Cadillac Rubber & Plastics for over 25 years. Mr. Mongar was a Life Member of the VFW Post #6864 of Cadillac, American Legion Post #94 of Cadillac, AMVETS Post #110 of Cadillac and the Korean War Veterans Association. He will be remembered for his sense of humor, making people laugh, and for being a good cook in particular his soup. On September 27, 1952 in Cadillac he married the former Eleanor L. Marker and she survives him along with their children: Candice (Michael) Reamer of Cadillac, Cynthia (David) Coker of Scottville, Michael Mongar of Cadillac, Benjamin Mongar (Brenda Gabrielson) of Cadillac, and Rebecca (David) Renzema of Allegan; grandchildren: Jodi (Clint) Keeler, Michael (Colleen) Reamer, Todd (Gizem) Callis, Matthew Callis, Joseph (Jolinda) Mongar, Daniel (Kami) Mongar, Erika Carson and Rachel (Derrick) Madsen; great grandchildren: Evan & Erin Keeler, Cole & Jaxson Reamer, Temperance Mongar; his sisters: Evelyn Brodberg of Cadillac, Beverly Maddox of Grand Rapids, and Maxine Cook of Cadillac. In addition to his parents he was preceded in death by an infant son, Randy, and his siblings: Rose, Mary, Betty, Charles, Floyd, William, Arnold, Richard and 3 infant siblings. Funeral services will be held 11:00 AM Thursday, January 13, 2022 at Peterson Funeral & Cremation Services in Cadillac with Chaplain Walter Ross officiating and full military rites under the auspices of the Cadillac Area Honor Guard. Friends may meet the family from 10:00 AM until services Thursday. Burial will take place at Boon Westside Cemetery. An online guestbook is available at www.petersonfh.com.

Alfred Joseph Mongar of Cadillac passed away Sunday afternoon, January 9, 2022 at his home. He was 95. Alfred was born on November 16, 1926 in Boon, Michigan to Thomas W. & Dorotha B. (Platz) Mongar. He attended school in the Cadillac area... View Obituary & Service Information

The family of Alfred Joseph Mongar created this Life Tributes page to make it easy to share your memories.

Send flowers to the Mongar family.