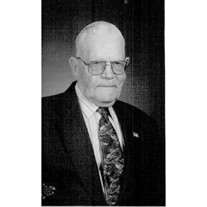 MCBAIN - Alfred Pluger, age 90 of McBain, went home to be with the Lord on June 26, 2011 at his home. He was born on June 17, 1921 in Highland Township of Osceola County to Harm and Lena (Zigter) Pluger. He married Ethel Mae Taylor on April 8, 1944 at the Taylor home at Lucas. She preceded him in death on Dec. 29, 1982. He married Grace VanDrie on July 13, 1985 at the Lucas Christian Reformed Church. He was a life-long member of the Lucas Christian Reformed Church where he has served as an elder and deacon. He enjoyed ice fishing and going to the restaurant to have coffee with his friends. He retired from the McBain Grain Company in 1986. He had also driven oil trucks for Johnson Oil Company. He had also worked for the Quist Oil Company for between 12 and 13 years. He served in the Army during World War II and served in the European Theatre and was engaged in combat in the Rhineland. He received several medals and attained the rank of corporal and returned home on Dec. 22, 1946 after serving for over four years. Surviving him are his wife Grace Pluger of McBain, children Michael (Pam) Pluger of McBain, Carolyn (Ivan) Koetje of Hudsonville, Judy (Raymond) Rodenbaugh of Lake City, and Barbara (Ronald) Velthouse of Wyoming. Step-children Les VanDrie of McBain, Jack (Nancy) VanDrie of Marion, and Paul (Coralee) VanDrie of Marion. 13 grandchildren and 24 great-grandchildren. Brother Merle (Willie) Pluger of Marion. Sister Gertrude DeHaan of Lowell and numerous nieces and nephews. Inlaws Catherine Schepers, Betty Taylor, James (Henrietta) Taylor, Bob Taylor, Vernon (Pearl) Taylor, Jerry (Louise) Taylor and Ivan (Marge) Quist, all of McBain. He was preceded in death by parents, Harm and Lena Pluger. Siblings Arthur (Liz) Pluger, Peter (Theresa) Pluger, Harley (Jeanette) Pluger, Jay (Marg) Pluger, Margaret (Gerrit) Warsen, Thelma (Al) VanderTuuk, Gladys Pluger. Inlaws Sharon Taylor, Lawrence Taylor, Ray Schepers, John DeHaan, Bonnie Taylor, Edward VanDrie, Linda Rae VanDrie, Henry VanHouten and Herman VanHouten. Funeral services will be 2 p.m. Wedsnesday at the Lucas Christian Reformed Church with Rev. Steve VanNoort officiating. Burial will be at the Mount View Cemetery in McBain. Visitation will be from 2 to 4 and 7 to 9 p.m. Tuesday at the Lucas Christian Reformed Church. Memorial contributions can be made to the Northern Michigan Christian School. An online guestbook is available at www.petersonfh.com. Funeral arrangements are by the Burkholder Funeral Home in McBain.

MCBAIN - Alfred Pluger, age 90 of McBain, went home to be with the Lord on June 26, 2011 at his home. He was born on June 17, 1921 in Highland Township of Osceola County to Harm and Lena (Zigter) Pluger. He married Ethel Mae Taylor on April... View Obituary & Service Information

The family of Alfred Pluger created this Life Tributes page to make it easy to share your memories.

Send flowers to the Pluger family.