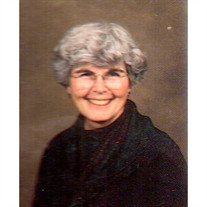 Alice Louise Wheeler of Cadillac passed away Saturday, March 2, 2013 at her home. She was 93. She was born in Mount Pleasant on January 30, 1920 to John & Ila (Vreeland) List, Jr. She graduated from Mount Pleasant High School and went on to study at Alma College for two years. Alice had been employed at the Leonard Refinery in Alma. On October 19, 1940 in Mount Pleasant she married Wayne Grant and he preceded her in October of 1957. She later married Richard Wheeler on July 24, 1959 in St. Louis, Michigan and he preceded her in death on June 9, 1984. Alice moved to Cadillac in 1963 and owned and operated the Pine Knoll Motel in Cadillac for many years with her husband. Mrs. Wheeler was a member of the Cadillac Area Artist Association and enjoyed watercolor painting, knitting, sewing and donated many mittens and caps to Headstart and Project Christmas. Alice was an active member of St. Mary's Episcopal Church in Cadillac since moving here. Survivors include her children: James (Gloria) Grant of Ada, Susan Smith of Durand, Mary (Jim) Pals of Cadillac, Jane Wheeler of Lowell and Mark (Shelley) Wheeler of St. Joseph; grandchildren: Eric, Sarah, Dana, Jennifer, Debbie, Denise, Manda, Kerri, Elijah and Elliot; 18 great grandchildren; 5 great- great grandchildren. In addition to her husbands she was preceded in death by a son, Robert Wayne Grant and a daughter-in-law, Linda Grant. The Family would like to extend a special thank-you to Alice's care givers; Jamie Walker, Erica Dick, Carolyn Rushford, Sue Hale, Tracie Hiltz, Yvonne Lane, Tina Champion and Lisa Hopkins. Memorial services will be held 11:00 AM Saturday, March 23, 2013 at St. Mary's Episcopal Church in Cadillac with Reverend David Brower and Linnea Stifler officiating. Friends may meet the family prior to the services at the church. For a more lasting memorial you are asked to consider contributions to the St. Mary's Episcopal Church Building Fund. Arrangements were made by the Peterson Funeral Home in Cadillac. An online guestbook is available at www.petersonfh.com.

Alice Louise Wheeler of Cadillac passed away Saturday, March 2, 2013 at her home. She was 93. She was born in Mount Pleasant on January 30, 1920 to John & Ila (Vreeland) List, Jr. She graduated from Mount Pleasant High School and went on to... View Obituary & Service Information

The family of Alice Louise Wheeler created this Life Tributes page to make it easy to share your memories.

Send flowers to the Wheeler family.