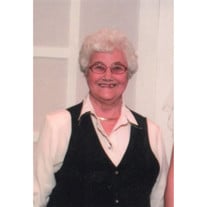 Amelia Rose Benson, life long resident of Cadillac, went home to be with the Lord on February 9, 2011. She was 77. She was born on April 7, 1933 to Edville and Permelia (Nichols) Carlson. Amelia graduated from Cadillac High School in 1951. She then married Robert K. Benson on June 16, 1951 and worked along side him running the family farm. In addition to farming and raising six children, Amelia served as Clam Lake Twp. Clerk for eight years and did volunteer work for various organizations, including: Michigan Farm Bureau where she also served on the State Women\'s Committee; American Red Cross; Love INC; and DHS. She enjoyed bowling, golfing, playing the piano, genealogy research, and family gatherings. During her early years, she was a member of the First Christian Church, and for the past two decades she was a member of the First Baptist Church where she sang in the choir and taught Sunday school for many years. Survivors include Robert, her husband of nearly 60 years, children; William (Jill) Benson of Cadillac, Kristine (Stephen) Liebrecht of Adrian, Jon (Jacqueline) Benson of Alpena, Karen (Steven) Sterzick of Alto, Debra (Mathias) Buckson of Ypsilanti, 20 grandchildren, a brother, Charles (Katie) Carlson of Cadillac, a sister, Estella Gorham of Battle Creek, sisters and brothers-in-law; Mary Carlson of Baldwin, Arthur R. Benson of Washington, Lucille and Joe Peterson, Jr. of Cadillac, Hartley Benson of McBain, Dorothy George of Cadillac, Bernice Wondergem of Marion, and many nieces and nephews. She was preceded in death by her eldest son, Kenneth, brother, Edville, a sister, Mary and her parents. Funeral services will be held Saturday, February 12, 2011 at 2:00 pm at First Baptist Church, 125 Stimson Street, Cadillac with Reverend Dave McMahon officiating. Visitation will be today (Friday) from 3:30pm to 8:30 pm at the First Baptist Church and on Saturday from 12:30 pm until service time at 2:00 PM. Burial will be in Clam Lake Township Cemetery, Wexford County, MI. Memorial Contribution can be made to the First Baptist Church of Cadillac or Love INC. Envelopes are available at the Peterson Funeral Home, Cadillac or the Church. An online guestbook is available at www.petersonfh.com

Amelia Rose Benson, life long resident of Cadillac, went home to be with the Lord on February 9, 2011. She was 77. She was born on April 7, 1933 to Edville and Permelia (Nichols) Carlson. Amelia graduated from Cadillac High School in 1951.... View Obituary & Service Information

The family of Amelia Rose Benson created this Life Tributes page to make it easy to share your memories.

Send flowers to the Benson family.