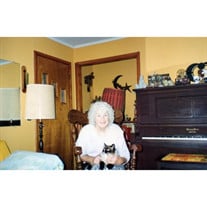 Anna M. Burkholder of Lake City went home to be with the Lord and her family members that preceded her on January 18, 2011 at the home of her son and daughter-in-law in McBain. She was 88. She was born in Reeder Township, Missaukee County on February 6, 1922 to John & Mary (Cady) Gilde. She married Albert Burkholder in Lake City on February 9, 1938 and he preceded her in death on September 21, 2006. Anna raised six children and for a few years she worked at the Missaukee CafÃ© in Lake City. She had been a faithful follower of the church and her life was an example of being loving and kind. She attended McBain Baptist Church along with her husband until health kept her from going, but she was always notified on what was going on by her church family. She enjoyed raising vegetable gardens and flower gardens and for the past three years her granddaughter Angie kept fresh flowers in the house year round for her. She also enjoyed riding horses, going camping, eating out, reading, family get togethers and loved her house pets and animals of all kinds. Anna\'s whole life was spent two and one half miles form where she was born and raised having lived on Kelly Road her entire married life. She will be greatly missed by her family even though they know that her battle with health issues is over and she has gone home to see: her husband, son, Larry Burkholder, who died in 1991, grandsons: Mark Fagerman and Bryan Bronkema, brothers: Francis Gilde, Ken Gilde, and Gordon Gilde, and sisters: Irene Baker and Helen Gallop. Survivors include her children: Norma (Gus) Fagerman of Pierson, Bruce Burkholder of Lake City, Diane (Ernie) Bronkema of McBain, Keith (Norma) Burkholder of McBain, and Wayne Burkholder of Lake City; grandchildren: Karen (Tom) Knorps of Cyprus, Karen Fagerman of Greenville, Susan (Brian) VanEnk of Sand Lake, Julie (Gary) Turner of Howard City, Janice (Rob) Smith of Grand Rapids, Craig (Kelly) Burkholder of Lake City, Stephanie (Gil) Brown of Lake City, Lisa Bronkema (Bryan\'s wife) of McBain, Dean (Amy) Bronkema of Walker, Tracey (Craig) Weston of Manhattan, KS, Daryl (Melissa) Bronkema of Middleville, Brent (Tamie) Bronkema of McBain, Angie Burkholder (Skeeter Kline) of Cadillac, Michelle (Mike) Nielsen of McBain, Heather (Jim) Lund of Lake City and Kevin (Jennifer) Burkholder of McDonough, GA; 51 great grandchildren and 17 great-great grandchildren; brothers and sisters: Dorr Gilde, Ed (Alice) Gilde all of McBain, Esther (Jim) Norman of Clare, Cora (Paul) Goresch and Joyce (Doug) Seelye all of Lake City; in-laws: Tyke (Dutch) Beerens of Falmouth and Donald (Mary) Burkholder of Lake City. Funeral services will be held 3:00 PM Friday, January 21, 2011 at the McBain Baptist Church with Reverends James Sweet and Gary Coleman officiating. Burial will be at Reeder Township Cemetery in Missaukee County. Visitation will be from 1:00 PM Friday until time of services at the church. Memorial contributions may be made to the McBain Baptist Church Awana program. Arrangements were made by the Burkholder Funeral Home. An online guestbook is available at www.petersonfh.com.

Anna M. Burkholder of Lake City went home to be with the Lord and her family members that preceded her on January 18, 2011 at the home of her son and daughter-in-law in McBain. She was 88. She was born in Reeder Township, Missaukee County... View Obituary & Service Information

The family of Anna M. Burkholder created this Life Tributes page to make it easy to share your memories.

Anna M. Burkholder of Lake City went home to be with the Lord...

Send flowers to the Burkholder family.