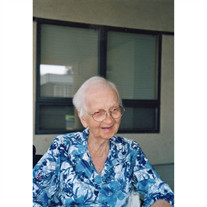 AnnaBelle (Pettengill) Moffitt of Townsend, Montana formerly of Cadillac died Friday, October 7, 2011 at Broadwater Health Center in Townsend, Montana where she had lived for the past four years. She was 101. She was born on November 16, 1909 in McEwan, Humphreys, Tennessee to Charles Lester & Margaret Catherine (Parker) Pettengill. She was the youngest of ten children: Clarence, Jessie, Lester, Clinton, Florence, RD, Raymond, Clayton, and Lillian, who have all preceded her in death. On July 16, 1931 she married Everett William Moffitt and he preceded her in death on November 30, 1982. They spent the major portion of their life together between Reed City and Cadillac. She moved to Cadillac as a young child and lived here for many years attending elementary schools and graduated from Cadillac High School in 1926. She attended Teacher\'s Normal in Cadillac and Ferris College in Big Rapids and went on to teach school in Cadillac, Reed City and Clare. AnnaBelle was a member of the Cadillac United Methodist Church and of the Women\'s Society and of the Bethany Circle and of the Order of the Eastern Stars. She was also a Red Cross Volunteer in Traverse City and Cadillac for many years. Survivors include her sons: Richard Everett (Emma) Moffitt of Townsend, Montana and David Isaac (Patricia) Moffitt of Idyllwild, California; 5 grandchildren: Lenore (Mark) Adams of Helena, MT, Daniel (Karen) Moffitt of Clancy, MT, William (Laura) Moffitt of Clarksville, TN, Angela (Raymond) Zentz of Ogden, UT and Robin Swanlund of California; 13 great grandchildren: Duncan (Sarah) Adams, Shawn Adams, Chad and Mikkell Moffitt, Alyssa Farber, Casey and Lindsey Moffitt, CeNedra, Richard, Christian Zentz, Caitlyn Zentz and Jessica and Rebekah Swanlund; one great-great grandson, Ethan Farber; and a sister-in-law, Ilene (Robert) Thiel of Reed City. Graveside services will be held 2:00 PM Thursday, October 13, 2011 at Maple Hill Cemetery in Cadillac with Parish Assistant Judy Coffey officiating. Friends may meet the family from 5-7 PM Wednesday at the Peterson Funeral Home in Cadillac.

AnnaBelle (Pettengill) Moffitt of Townsend, Montana formerly of Cadillac died Friday, October 7, 2011 at Broadwater Health Center in Townsend, Montana where she had lived for the past four years. She was 101. She was born on November 16, 1909... View Obituary & Service Information

The family of AnnaBelle (Pettengill) Moffitt created this Life Tributes page to make it easy to share your memories.

Send flowers to the Moffitt family.