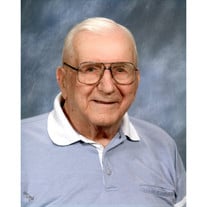 Anton Joseph \"Tony\" Nikolitch of Cadillac passed away Sunday, December 30, 2012 at Sunnyside Senior Living in Cadillac. He was 94. He was born on June 3, 1918 in Cleveland, Ohio to Joseph & Frances (Hanava) Nikolitch and at the age of one the family moved to Cadillac, where he remained a life-long resident. He attended St. Ann Catholic School and Cadillac High School and left school to help support the family during the depression. He married the former Sophie R. Bajtka on November 30, 1940 at St. Joseph Catholic Church in Manistee and she preceded him in death on December 26, 2007. Tony had served in the United States Army Infantry during World War II in I Company, 184th Battalion, 7th Division in the South Pacific as part of the Red Arrow division in radio communication. In the final months of the war he was wounded twice and received a Purple Heart. When Tony returned to the fighting there were only eleven left in I Company. Mr. Nikolitch was a loving husband and father who treasured his family. He sometimes worked three jobs to give his family those little things that made life more enjoyable. He loved all kinds of sports including: snow skiing, water skiing, bowling, softball, and golf. He was a member of St. Ann Catholic Church and became a member of the Knights of Columbus at age 18. Tony was employed at several jobs including: BF Goodrich, the U.S. Postal Service, the Cadillac Evening News, Breidenstein\'s Gas Station, RW Meyer Construction as foreman in the summer and assistant manager at Caberfae Ski Area in the winter, where he helped to establish the first Ski Patrol. Later with his experience in road construction he was employed with the State of Michigan Highway Department as a soil density inspector. After retiring Tony and his wife Sophie enjoyed spending their winters in Florida for about 20 years. Tony spent his last year and a half at Sunnyside Senior Living where he expressed his heartfelt appreciation toward the staff and hospice workers who provided his care. He will be greatly missed for his joking manner, caring devotion for his family, and loving generosity and kindness towards his fellow man. Survivors include his children: Kenneth (Patricia) Nikolitch of Minnesota, Barry Nikolitch of Moorestown, and Mary Lou Taylor of Cadillac; 8 grandchildren and 9 great-grandchildren. In addition to his parents and his wife he was preceded in death by a son Richard and a brother, James. The Mass of Christian Burial will be held 11:00 AM Friday, January 4, 2013 at St. Ann Catholic Church in Cadillac with Msgr. Francis J. Murphy as celebrant. Burial will be at Mount Carmel Cemetery in Cadillac. Friends may meet the family Thursday from 5-7 PM at the Peterson Funeral Home in Cadillac with the Rosary prayed at 7 PM. Memorial contributions may be made to Saint Ann Catholic Church and Hospice of Michigan. An online guestbook is available at www.petersonfh.com

Anton Joseph \"Tony\" Nikolitch of Cadillac passed away Sunday, December 30, 2012 at Sunnyside Senior Living in Cadillac. He was 94. He was born on June 3, 1918 in Cleveland, Ohio to Joseph & Frances (Hanava) Nikolitch and at the age of one... View Obituary & Service Information

The family of Anton Joseph "Tony" Nikolitch created this Life Tributes page to make it easy to share your memories.