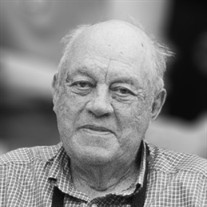 Art Benson, age 89, died unexpectedly Saturday, August 25, 2012 in Bellingham, WA. He was born August 26, 1922 in Cadillac, MI, the son of the late Arthur and Anna (Swanson) Benson. He graduated Phi Beta Kappa from Michigan Tech in Mechanical Engineering. Art worked as a Mechanical Engineer for Kimberly Clark in Neenah, WI. Mr. Benson served his country during World War II in the Army, stationed in the Philippines. He married Tessa Waite on June 14, 1947 in Manton, MI. They made their home in Neenah, Wisconsin in 1950 and then moved to the Town of Vinland in 1964. Art\'s wife Tessa passed away in 1997. For the last 6 years Art has made his home in Bellingham, WA. He is survived by his four children; Karolyn Benson- Williamson (husband Steve), Richard Benson (wife Barbara Luikens), Kathryn Keister (husband Bradley), Reginald Benson, seven grandchildren; Will Benson, Jennifer, Kirsten and K. Ellen Keister and Alexander (wife Alena), Nicholas and Katie Benson;, one great-grandchild Catherine Quinn Hanna, sisters; Lucille Peterson (husband Joe) and Bernice Wondergem, brothers; Hartley Benson and Robert Benson, and many loving relatives and friends. He was preceded in death by his wife Tessa Benson, son Ronald Benson, sisters; Mildred Benson and Dorothy George and brother Leonard Benson. Funeral services will be held 2:00 PM Saturday, September 1, 2012 at the Peterson Funeral Home in Cadillac with Reverend Bob Friske officiating. Burial will be in Greenwood Township Cemetery, Manton. Friends may meet the family from 1:00 PM until the time of services on Saturday. In lieu of flowers donations may be made to The Art Benson Deacon Fund at The Church at Bakerview, 414 W. Bakerview Rd. Bellingham, WA 98226. This fund was created to aid unemployed construction workers in the Bellingham area. An online guestbook is available at www.petersonfh.com.

The family of Arthur Richard Benson created this Life Tributes page to make it easy to share your memories.

Send flowers to the Benson family.