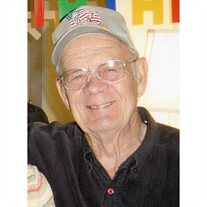 Arthur Watson Stenman passed peacefully into the arms of Our Lord early this Tuesday morning, May 22, 2012, at his home surrounded by his five grown children and loving wife of nearly 52 years, Dorothy. Art was born on September 6, 1932, on a farm in Tustin to Fred and Signe (Watson) Stenman. He graduated in 1950 from Tustin High School and enlisted in the Army in 1952. Dorothy Faunce and Art were married at First Presbyterian Church in Cadillac on June 25, 1960. They lived in Cadillac until 1975, when they relocated to Alpena for Art\'s job with the Michigan Department of Transportation. Art retired from MDOT in 1985 and in 1989 Dorothy and Art returned to live in Cadillac on Lake Mitchell. In 1998, they began wintering in Ellenton, Florida. Art was a member of the Elks, and a past member of the American Legion and AmVets. Art\'s greatest joy was spending time with his family -- he was a proud father and grandfather. Many perfect summer afternoons were spent on Lake Mitchell, a pontoon full of kids and grandkids, with Art as Captain. He would quietly listen and observe all of the laughter and rowdiness around him, a small smile on his lips --and occasionally contribute a funny one-liner that reminded the crowd that Papa was part of the gang, too. Whether it was talking around the campfire or quietly watching a Tiger baseball game together, Art\'s soothing nature was a comforting presence anytime family was gathered together. Art was greatly loved by his family -- his wife Dorothy, and their 5 children and their families: Shari (Stenman) Donley and husband Jerry, and grandchildren Derek, Kelsey, Ryan and great-granddaughter, Desirae; Christine (Stenman) Lawrence and husband Rick, and grandchildren Rachel, Dana, Courtney and Brock Julien; Steve Stenman and grandson Nickolas; Scott Stenman and wife Sherri, and grandchildren Natalie, Lauren and Alexander; Heidi (Stenman) Dell\'Acqua and husband Tony, and grandchildren Jack and Ava Mikula as well as his sister, Ella Mae Swanson of Leroy who all survive him. In his passing, Art is being reunited in Heaven with his parents, as well as his siblings Everett, Arden, Evelyn, Della, and Jean Jennings Guthrie. Art\'s life will be celebrated with a funeral service 11:00 AM Saturday, May 26, 2012 at the First Presbyterian Church in Cadillac with Reverend Paul Tomlinson officiating. Friends may meet the family Friday from 6-8 PM at the Peterson Funeral Home in Cadillac. Memorial contributions may be made to the First Presbyterian Church. An online guestbook is available at www.petersonfh.com.

Arthur Watson Stenman passed peacefully into the arms of Our Lord early this Tuesday morning, May 22, 2012, at his home surrounded by his five grown children and loving wife of nearly 52 years, Dorothy. Art was born on September 6, 1932, on... View Obituary & Service Information

The family of Arthur Watson Stenman created this Life Tributes page to make it easy to share your memories.

Arthur Watson Stenman passed peacefully into the arms of Our...

Send flowers to the Stenman family.