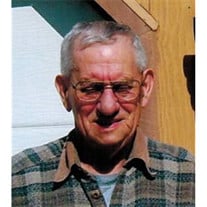 FALMOUTH - Bernard J. \'Bud\' VanHaitsma, age 84, of Falmouth, passed away at his home on August 3, 2011. He was born on March 15, 1927 in Grand Rapids to Andrew and Fannie (Bierens) VanHaitsma. He married Louise Riedel on December 1, 1951 in Lucas. He had worked in the building trades for many years and retired in 1989. He served in the U.S. Navy during World War II in the Asiatic-Pacific area. Bud enjoyed hunting, fishing, gardening and woodworking. He is survived by his wife, Louise VanHaitsma, of Falmouth; children, Dale (Joy) VanHaitsma, Karen (Leroy) Curtis and Bruce VanHaitsma, all of McBain; four grandchildren, Shawn Curtis, James VanHaitsma, Nicole Curtis and Amanda VanHaitsma; one great-grandson, Ashton Conway; siblings, Delores (Marve) Brannam of Falmouth, Elaine (Rex) Rozelle of Hudson and Phil (Dale) Birtles of McBain; in-laws, Bob Jenema of Falmouth, James (Connie) Riedel of Clare and Ken (Rosemary) Riedel of Clio; and many other relatives. He was preceded in death by a son, Steve VanHaitsma; brother, Herman VanHaitsma; and sister, Marian Jenema. Funeral services will be at 1 p.m., on Saturday, August 6, 2011, at the Falmouth Reformed Church, with Dick Herweyer officiating. Interment will take place at the Falmouth Cemetery. Visitation will be from 2 to 4 and 7 to 9 p.m., Friday, August 5, 2011, at the Burkholder Funeral Home in McBain. Memorial contributions may be made to Hospice of Michigan. An online guestbook is available at www.petersonfh.com.

The family of Bernard J. VanHaitsma created this Life Tributes page to make it easy to share your memories.

Send flowers to the VanHaitsma family.