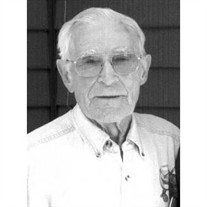 Bert B. Brinks of Cadillac went to be with his Lord in Heaven on May 2, 2011 at the age of 91. He was born on January 18, 1920 in Marion to Ben G. & Anna (Rozeveld) Brinks. He served in the United States Army in North Africa and Italy from January of 1942 to June of 1945 without a furlough and was sent home the day the war ended. On July 13, 1945 he married Willie DeVries in Lucas and she preceded him in death on August 3, 1990. On January 4, 1992 in Grand Rapids he married Anne DeVries (Willie\'s sister) and she preceded him in death on November 1, 2009. After farming in Marion for several years he served as Maintenance Mechanic at Kysor Industrial Corp. (now Borg Warner) in Cadillac for 35 years and retired in 1982. After retiring, he and his wife Willie opened Brinks Photo Mount (now Brinks Custom Framing) in Cadillac and sold the business in 1990 shortly after Willie\'s death. Bert was a perfectionist at carpentry skills and knew where every tool was in his workshop. He continued serving the Lord by using his gift as a â€œfix itâ€ man and could analyze problems quickly and fix them. Bert was a charter member of the Cadillac Christian Reformed Church where he served as deacon, elder, was on the building committee and other committees and spent many hours â€œfixingâ€ things there. He enjoyed fishing, hunting, traveling, having coffee with friends and helping friends and neighbors around their homes. He is survived by his children: Karen (Brinks) & Mel Brunink, Kay (Brinks/Dusendang) & Nick Wetherington all of Rockford, MI, Peggy (Brinks) & Gordon Baas of Cadillac, Steve Brinks (Lori) of Howard City; grandchildren: Melissa (Brunink) & Rob Prince, Laura (Brunink) & Phil Hall, Amanda (Dusendang) & Dan Joyce, Ben & Dorothy Dusendang, Jeff & Kelly Baas, Craig & Amanda Baas, Danielle (Brinks) Richards, Beth Brinks, Amanda (Brinks) & Sean Waanders, and David Brinks; eight great grandchildren; a sister, Greeta & Jim Keen; in Laws: Harvey & Florence DeVries, Jay & Norma DeVries, Margie & Marvin Koetje, Jessie and Bernie Wheelock, George & Betty Groen, Sy & Jan Ellens; many nieces and nephews. In addition to his wives he was preceded in death by a son, Kenneth, grandson, Randy Baas, son-in-law, Jack Dusendang, 5 brothers and 3 sisters and their spouses: Ed & Ann Brinks, Ralph & Marie Brinks, Joe & Emma Brinks, Ben & Theresa Brinks, Laura & George Talsma, Agnes & Leonard Miller, Margaret Keen/Lake; and in laws: Harold & Helen Zinger, Marcia (VanderWall) DeVries and Minniette (DeVries) Ellens. Funeral services with full military under the auspices of the Cadillac Area Honor Guard will be held 2:00 PM Friday, May 6, 2011 at the Cadillac Christian Reformed Church with Reverend Brian Seifert officiating. Burial will be at Richland Township (Lucas) Cemetery in Missaukee County. Friends may meet the family from 4-8 PM Thursday at the Peterson Funeral Home in Cadillac and from 1:00 PM until time of services at the church on Friday. Memorial contributions may be made to the Cadillac Christian Reformed Church for Christian Arts Enhancement or to Northern Michigan Christian School. An online guestbook is available at www.petersonfh.com

Bert B. Brinks of Cadillac went to be with his Lord in Heaven on May 2, 2011 at the age of 91. He was born on January 18, 1920 in Marion to Ben G. & Anna (Rozeveld) Brinks. He served in the United States Army in North Africa and Italy from... View Obituary & Service Information

The family of Bert B. Brinks created this Life Tributes page to make it easy to share your memories.

Bert B. Brinks of Cadillac went to be with his Lord in Heaven...

Send flowers to the Brinks family.