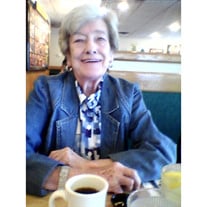 Bertie M. Black of Tustin passed away Tuesday, March 11, 2014 at Munson Medical Center in Traverse City. She was 78. She was born on January 26, 1936 in Cadillac to Frank & Alice (Harris) Voorhees and they preceded her in death. Bertie graduated from Cadillac High School and had been employed at Fashion Industries for three years and retired from Michigan Bell/Ameritech where she had been employed for 27 years. Mrs. Black was an avid scrap booker, and enjoyed gardening, crafts, reading, traveling, camping, photography, trips to the casino with friends and most of all spending time with her family. She was a member of the Red Hat Society, the Telephone Pioneers of America and participated in Relay for Life events. On May 20, 1957 She married Richard L. Black, Sr. and he survives her along with their son, Frank A. Black, Sr. of Cadillac; daughter-in-law, Melissa M. Black of Tustin; 6 grandchildren: Frank (Teresa) Black, Jr., Trevor (Linda) Black, Jason (Emilie) Black, Justin (Danielle) Black, Jenny (Ken) Akini, and Heidi Black (Shawn Langenberg); 10 great grandchildren and one on the way; a brother, Mike (Gail) Voorhees of Reed City; 2 sisters: Patricia Howell of Leroy and Mary (Wayne) Kleckler of Big Rapids; brother-in-law, Art (Sharon) Black of Tustin; and several nieces and nephews. In addition to her parents she was preceded in death by a daughter, Lynda Black in 1967; a son, Richard L. Black, Jr. in 2012 and brothers: Jim, Brian, and Bill Voorhees. Funeral services will be held 11:00 AM Saturday, March 15, 2014 at the Peterson Funeral Home in Cadillac with Pastor Will Markham officiating. Burial will be at Maple Hill Cemetery in Cadillac. Friends may meet the family from 5-7 PM Friday at the Funeral Home. An online guestbook is available at www.petersonfh.com.

Bertie M. Black of Tustin passed away Tuesday, March 11, 2014 at Munson Medical Center in Traverse City. She was 78. She was born on January 26, 1936 in Cadillac to Frank & Alice (Harris) Voorhees and they preceded her in death. Bertie graduated... View Obituary & Service Information

The family of Bertie M. Black created this Life Tributes page to make it easy to share your memories.

Send flowers to the Black family.