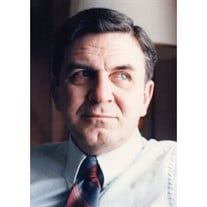 Charles â€œWesâ€ Rawlin of Cadillac was promoted to Glory Saturday, September 8, 2012. He was 74. He was born August 21, 1938 in Fargo, North Dakota to Joseph and Margaret (Waite) Rawlin. Wes attended Indiana University as well as Salvation Army School of Officers Training. He also served his country in the United States Air Force. Wes served in the ministry for the Salvation Army and had also owned and operated Hagstrom\'s Flowers. Later he worked for the Department of Corrections. Upon retirement he and his wife, Alice, worked with Wycliffe Bible Translators. During retirement Wes also worked with prison ministries with Bill Glass, Champions for Life and self-published a daily devotional that he distributed to the inmates entitled, Freedom Book. He was a life member of Kiwanis. He enjoyed woodworking, sports and collecting sport memorabilia. On June 2, 1962 in Port Huron he married the former Alice Andrews and she survives him along with their children: Ruth (David) Tacoma of Falmouth and Dr. J. William â€œBillâ€ (Tina) Rawlin of Traverse City; six grandchildren: Andrew (Christina), Reuben (Emily), Wesley, Joseph, Jayden and Jenna; three sisters: Faith (Bill) Wilson of Simcoe, Ontario, Ruth Wilson of Ann Arbor and Gwendolyn Fraley of Anderson, Indiana; his mother-in-law, Helen Andrews of Cadillac; and many nieces, nephews and cousins. He was preceded in death by his parents; brothers: Hubert and Bill and sisters: Beulah, Kathleen and Constance. Memorial services will be held Friday, September 14, 2012 at the Salvation Army Citadel, 725 Wright St., Cadillac, MI at 11:00 AM. In lieu of flowers memorial contributions may be made to: Bill Glass Prison Ministry, Wycliff Bible Translators or the Salvation Army. Arrangements were made by the Peterson Funeral Home in Cadillac. An online guestbook is available at www.petersonfh.com

Charles â€œWesâ€ Rawlin of Cadillac was promoted to Glory Saturday, September 8, 2012. He was 74. He was born August 21, 1938 in Fargo, North Dakota to Joseph and Margaret (Waite) Rawlin. Wes attended Indiana University as well as Salvation... View Obituary & Service Information

The family of Charles â€œWesâ€ Rawlin created this Life Tributes page to make it easy to share your memories.

Send flowers to the Rawlin family.