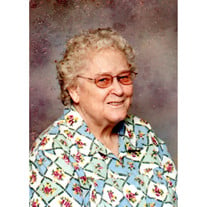 Charlotte Mae VanBuskirk of Cadillac passed away January 31, 2012 at Second Avenue Adult Foster Care Home in Cadillac. She was 78. She was born in Genesse Township, Genesse County, Michigan on September 19, 1933 to William C. and Mary E. (Linabery) Berryhill and they preceded her in death. Charlotte enjoyed embroidery, photography, cooking and canning. She especially enjoyed spending time with her family and grandchildren She had attended Revival Center Church in Cadillac. She had been the owner and operator of John\'s Truck Stop near Marion. She had also farmed and worked at various factories in the area. She is survived by her sons, Robert (JoAnn) VanBuskirk of Clinton Township, Michigan and David VanBuskirk of Greenbrier, Arkansas; daughter, Teresa Perry of Cadillac; grandchildren: Ben (Eunice) VanBuskirk, Jonathon VanBuskirk, Janele (Andy) Sutterfield, Jaclyn VanBuskirk, RJ Perry, Nicole Perry and several extended grandchildren; four great-grandchildren; brother, Eldon (Ann) Berryhill of Marion; sister, Joan Bell of Evart and her best friend, Shirley VanScoyoc of Cadillac. In addition to her parents Charlotte was preceded in death by a brother, Duane Berryhill, a granddaughter, Amanda Perry and son in law, Robert Perry. Funeral services will be held 10:00 AM Saturday, February 4, at the Peterson Funeral Home in Cadillac with Pastor William Markham officiating. Burial will be at Hillcrest Cemetery in Clare County. Friends may meet the family from 2-4 and 6-8 Friday, at the Funeral Home. Memorial contributions may be made to the family or Mercy Hospice. An online guestbook is available at www.petersonfh.com.

The family of Charlotte Mae VanBuskirk created this Life Tributes page to make it easy to share your memories.

Send flowers to the VanBuskirk family.