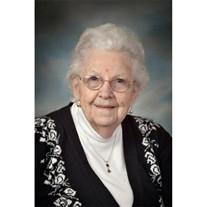 Christena VanderVlucht Taylor went home to be with her Lord on Monday, December 3, 2012, at the Curry House Assisted Living Center in Cadillac. She was 100. Christena was born on November 14, 1912, in Richland Township, Missaukee County, to Peter and Rena (Grashuis) Elenbaas. She married John VanderVlucht in Lucas on November 26, 1930, and he preceded her in death on June 9, 1978. She married Wilbur Taylor on July 8, 1983, at Christena\'s home in Lucas, and he preceded her in death on January 12, 2000. Christena and her husband, John, had farmed in Richland Township, and Christena had done maintenance cleaning at industrial offices and private homes for over 15 years. She and her husband adopted both of their children when they were young and raised them up very well. They took in many individuals who needed a place to live and were always a very caring couple. Christena would rather give than receive and was loved by all who knew her. She enjoyed cooking, gardening, canning, sewing quilts, crocheting afghans and lap robes for the mission field, and crocheting caps for infants for Cadillac Mercy Hospital and Care Net. Her life revolved around her church, where she had taught Sunday School, was a member of the Ladies Circle and had attended the Lucas Rehoboth Reformed Church her entire life right up until this past summer. The family recently hosted a large gathering at the church for her 100th birthday. She is survived by two sons: Louis (Norma) VanderVlucht of Peoria, Ariz., and Lee (Loretta) VanderVlucht of Falmouth; stepson, Grant (Linda) Taylor of West Olive; grandchildren, Kim and Steve Winston, Terry and Karen VanderVlucht, Suzanne Richter, and Kevin and Holly VanderVlucht; stepgrandson, Kent and Jennifer Taylor; six great-grandchildren, three step-great-grandchildren; sister-in-law, Louise Vandenbos, and many nieces and nephews. She was preceded in death by her husbands, John and Wilbur; step-great-grandson, Kurt Taylor; sisters and husbands, Katie and Herman Lucas, Marie and Art Bazuin, Jo and Sam Smits; brothers and wives, Gerrit and Janet Elenbaas, Ivan and Lydia Elenbaas, in-laws, Gerrit and Charlotte VanderVlucht, Hans and Ada VanderVlucht, Nick and Louise VanderVlucht, Sam and Grace VanderVlucht, Gertrude and John Bronkema, Clara and Elmer Gould, Al Ensign, Weller and Clara Taylor; and sister-in-law, Esther White. Funeral services will be held on Friday, December 7, 2012, at 3 p.m. at the Lucas Rehoboth Reformed Church, with the Rev. James Zinger officiating, with burial in the Lucas Cemetery. Visitation will be held on Thursday, December 6, 2012, from 5 to 8 p.m. at the Burkholder Funeral Home in McBain, and also one hour prior to services at the church on Friday. Memorial contributions may be made to the church building fund. A guestbook is available at www.petersonfh.com.

Christena VanderVlucht Taylor went home to be with her Lord on Monday, December 3, 2012, at the Curry House Assisted Living Center in Cadillac. She was 100. Christena was born on November 14, 1912, in Richland Township, Missaukee County, to... View Obituary & Service Information

The family of Christena VanderVlucht Taylor created this Life Tributes page to make it easy to share your memories.

Christena VanderVlucht Taylor went home to be with her Lord on...

Send flowers to the Taylor family.