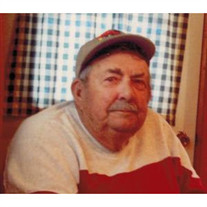 Claude E. Marcus age 84 of McBain went home to be with his Lord on June 12, 2011 at his home. He was born on November 3, 1926 in Richland Township, Missaukee County to Ray and Nellie (Elenbaas) Marcus. He married Gertrude Bekken on August 6, 1948 in McBain. He served in the U.S. Army during World Warr II. Claude had been a building contractor building many homes over the 30 years he ran his business. He had also been the Grounds Superintendent at the Missaukee Golf Course for over 14 years. He graduated from the McBain Rural Agricultural School in 1944. Through the years he has been an avid supporter of the McBain Ramblers in all of the different sports activities. He enjoyed making bets with his coffee drinking buddies on the outcome of not only local games but American and National League games. He also was a fan of the Tigers and the last game he watched they went into first place in the league. He enjoyed hunting and for over 60 years he has gone to Canada fishing with friends and family. He loved his dogs and always had one as a house pet. He was a member of the McBain United Presbyterian Church where he had served as an elder and deacon. He will be greatly missed by the community. He is survived by wife, Gert Marcus of McBain; children and grandchildren, Sherie (Al) Thomsen of Cadillac, and there children, Nathan and Jennifer Thomsen and Ashley Thomsen and finance Agestino Magliano, Vickie (Michael) Bosscher of McBain and their children, Rachelle (Kevin) Boven, Anna (John) Goodrich, Tyler (Megan) Scholten, Brett Scholten and friend Nicole; stepchildren, Jodi (Scott) Joseph, and Todd Bosscher, Robert (Donna) Marcus of McBain and their children, Steven Schryer, Scott (Jamie) Schryer, and Shawn Marcus, Lori (Jerry) Veltema of McBain and their children, Katie Veltema and Kyle and friend; 17 great grandchildren; special nieces, Judy Fex of Grand Rapids, and Dee Briggs of McBain; inlaws, Edith Quist of Cadillac, Dorothy Shelton of Flint, Ray (Angie) Elenbaas of Jenison, Harold (Pat) Elenbaas of Jenison, Marian Elenbaas of Grandville, Anita Elenbaas of Plant City, Fla., Joan Elenbaas of Bay City, Mae Elenbaas of McBain, Kathy Elenbaas of Manistee, Fran Bekken and Ed Bekken of McBain and Ken (Iva) Bekken of Marion; and special dog, GiGi. He was preceded in death by his parents; sister, Caroline (Lloyd) Duddles; brother, Tony (Frances) Marcus; son-in-law, Gary Scholten; father-in-law and mother-in-law. Evert (Ed) Anna Bekken; step-father-in-law, Richard Elenbaas. Funeral Services will be held at 11 a.m. on Wednesday, June 15, 2011 at the McBain United Presbyterian Church, with Rev. David Weber officiating. Burial will be at Mount View Cemetery, with military grave side services conducted by the Cadillac Area Honor Guard. Visitation will be from 2 to 4 and 7 to 9 p.m. on Tuesday, June 14, 2011 at Burkholder Funeral Home in McBain. Memorial contributions may be made to the church. An online guestbook is available at www.petersonfh.com.

Claude E. Marcus age 84 of McBain went home to be with his Lord on June 12, 2011 at his home. He was born on November 3, 1926 in Richland Township, Missaukee County to Ray and Nellie (Elenbaas) Marcus. He married Gertrude Bekken on August 6,... View Obituary & Service Information

The family of Claude E. Marcus created this Life Tributes page to make it easy to share your memories.

Claude E. Marcus age 84 of McBain went home to be with his Lord...

Send flowers to the Marcus family.