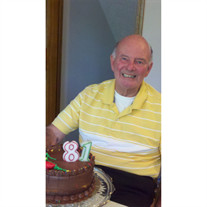 Clayton C. Jesweak of Cadillac died Monday, July 8, 2013 at Curry House Assisted Living in Cadillac. He was 81. He was born on August 19, 1931 in Detroit to Clayton C. and Isabell M. (Zschunke) Jesweak, Sr. and they moved to Cadillac when Clayton was 15. Clayton graduated from Cadillac High School in 1949 and attended University of Detroit for one year before enlisting for the Korean War and served from 1952 to 1953 and upon being honorably discharged he immediately went to Central Michigan University and graduated from there in 1958 with his bachelor's degree in accounting. In 1960 he joined Kysor Heater Company and was an integral part of the growth into what became Kysor Industrial Corporation and retired 31 years later as Senior Vice President and Chief Financial officer and member of the Board of Directors. As a real advocate for education he served on the Cadillac school board for several years and also served on the Finance Board for Mercy Hospital. His greatest love was his family and he enjoyed spending time with them. He could be found water skiing on the lakes in the summer and skiing on the slopes in the wintertime. One of his many talents was his love to play the piano which he started doing at age 3 and he never turned down the opportunity to play and entertain. Other activities he enjoyed were traveling, boating, swimming and visits with friends and spending winters in Port Charlotte, Florida. He was an active member of St. Ann Catholic Church in Cadillac and the Optimist Club of Cadillac as well as being active on many other boards and committees. On January 16, 1960 in Cadillac he married the former Mary Ann Barry and she survives him along with their children: Michael (Lalaine) Jesweak of Port Charlotte, FL, Lori Ann (Timothy) Caniff of Cadillac, and Linda (David) Sayfie of Grand Rapids; 9 grandchildren: Scott (Tonya) Jesweak, Malinda Jesweak, Jason Jesweak, Daniel McRoberts, Thomas McRoberts, Brian (Janelle) McRoberts, and Mitchell, Clayton and David Sayfie; five great grandchildren; and a brother, Gordon (Jane) Jesweak of Cadillac; many nieces and nephews. He was preceded in death by his parents. The Mass of Christian Burial will be held 10:00 AM Thursday, July 11, 2013 at Saint Ann Catholic Church in Cadillac with Msgr. Francis J. Murphy as celebrant. Visitation will be from 4-7 PM Wednesday at the Peterson Funeral Home in Cadillac with a Prayer Service at 5:30 PM led by Deacon Jim Siler. His final resting place will be at Mount Carmel Cemetery in Cadillac. In lieu of flowers contributions may be made to St. Ann School, Alzheimer's Disease Association or to the charity of your choice. An online guestbook is available at www.petersonfh.com.

Clayton C. Jesweak of Cadillac died Monday, July 8, 2013 at Curry House Assisted Living in Cadillac. He was 81. He was born on August 19, 1931 in Detroit to Clayton C. and Isabell M. (Zschunke) Jesweak, Sr. and they moved to Cadillac when Clayton... View Obituary & Service Information

The family of Clayton C. Jesweak created this Life Tributes page to make it easy to share your memories.

Send flowers to the Jesweak family.