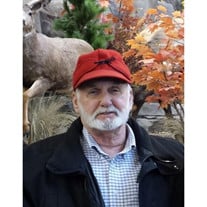 Dale C. Wightman of Cadillac passed away Thursday, February 20, 2014 at Munson Medical Center in Traverse City. He was 72. He was born June 5, 1941 in Pontiac, Michigan to Donald F. and Viola G. (Sherman) Wightman and they preceded him in death. Dale graduated from Avondale High School in Auburn Heights in 1959, and then he went to work at General Motors Truck. In 1972 he moved to Cadillac where he worked as the quality control manager at Four Star Corporation. He also owned and operated Dale's Trailer Service in Cadillac. Later Dale worked at Four Winns for over 20 years, retiring in 2007. He was a member of Boon Baptist Church and had served as Deacon and Hospital Visitation Volunteer for the church. He enjoyed hunting, fishing, camping and building things. He loved his family and grandchildren and shared many true, but unbelievable stories with those around him. Above all Dale was a great husband, father and grandfather and led by example. On June 6, 1959 in Pontiac, Michigan he married the former Susan M. Bunker and she survives him along with their children: Cheryl (Ron) Edwards, Mark (Jane) Wightman, Shelly (Bruce) Schroeder and Traci (Larry) Springberg all of Cadillac; nine grandchildren; seven great grandchildren; siblings: Janice (Carlton) Mercer of Harrietta, Larry (Pamela) Wightman of Oxford, Michigan, and Roger (Paulette) Wightman of Nipomo, California; many nieces and nephews; brother in law, Ronald Bunker of Lake Orion, Michigan and sister in law, Lois McClusky of Inverness, Florida. In addition to his parents he was preceded in death by a nephew, Tom Fuller in 1990. Funeral services will be held 2:00 p.m. Sunday, February 23, 2014 at the Boon Baptist Church with Reverend Martin Siegwart officiating. Burial will be at Selma Township Cemetery in Wexford County. Friends may meet the family from 4-7 p.m. Saturday at the Peterson Funeral Home in Cadillac. Memorial contributions may be made to the Boon Baptist Church or American Cancer Society. An online guestbook is available at www.petersonfh.com.

Dale C. Wightman of Cadillac passed away Thursday, February 20, 2014 at Munson Medical Center in Traverse City. He was 72. He was born June 5, 1941 in Pontiac, Michigan to Donald F. and Viola G. (Sherman) Wightman and they preceded him in death.... View Obituary & Service Information

The family of Dale C. Wightman created this Life Tributes page to make it easy to share your memories.

Send flowers to the Wightman family.