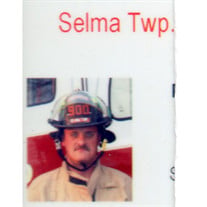 Darold Lee Wright, Jr. of Boon died Wednesday, February 9, 2011 at Mercy Hospital in Cadillac. He was 42. \n\nHe was born July 27, 1968 in Cadillac to Darold Lee Sr. and Marilyn Kay (Whitney) Wright. He graduated from Cadillac High School in 1987. \n\nHe had worked at Rexair and was a Chef at Herman\'s European CafÃ© for several years. He also worked at Biewer Sawmill in McBain for over 3 years. He went to Baker College and graduated from the EMS program and was a volunteer for Selma Township Fire Dept. and was continuing his training for Fire Fighting and also was on the Selma Rescue squad. He enjoyed playing softball, hunting and had an unlimited knowledge of sports information. He watched sports of all kinds and was a huge Red Wing and Tigers Fan.\n\n Survivors include his fiancÃ©e, Jennifer Baughan of Boon, children, Brittney Wright of Jackson , Lance Wright of Jackson, Darrian Wright of Manton, Brandon Mead, Kylee Kearney- Wright of Cadillac, granddaughter, Julia Jacobs of Jackson, father, Darold L.Wright, Sr. ( Judy Dunn )of Cadillac, brother, Dennis (Brenda) Wright of Cadillac, sister, Julie (Frank) Consolino of South Haven, grandparents, Willard and Velma Wright of Cadillac and many nieces and nephews. He was preceded in death by his mother in 2003 and his grandparents, Carl and Geneva Swiger.\n\n Funeral services will be held Saturday, February 12, 2011 at 11:00 am at Peterson Funeral Home, Cadillac with Chaplain Steve Horvath officiating. Visitation will be toady (Friday) from 2-4 and 6-8pm at Peterson Funeral Home. Burial will be in Selma Township Cemetery, Wexford County, MI. Memorial contributions can be made to the Selma Township Fire Dept. or the Family.\n\nAn online guestbook is available at www.petersonfh.com\n

The family of Darold Lee Wright, Jr. created this Life Tributes page to make it easy to share your memories.