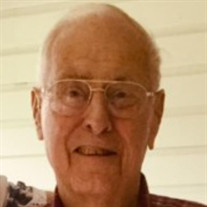 Darrel Eugene “Red” Barnes of Cadillac formerly of Ravenna passed away Tuesday, May 10, 2022 at Green Acres Retirement Living in Cadillac. He was 93. Darrel was born on August 17, 1928 in Manton to Percy Eugene & Emma Velma (Longstreet) Barnes. Darrel was a 1947 graduate of Manton High School. He also served 4 years in the United States Naval Reserves. He had been employed at Howmet Corp in Whitehall for over 30 years. He was a member of the Ravenna United Methodist Church and enjoyed golf, wood working and taking care of his lawn. On June 28, 1952 he married the former Mary L. Parson and she preceded him in death on March 24, 1984. Later on August 4, 1990 he married Gertrude (Panzl) Barnes and she preceded him in death on June 5, 2018. Darrel is survived by his son, Michael (Doreen) Barnes of Cadillac; step-children: Barb (Norm) Rohen of Coopersville, Louise Barnes of Grand Rapids, Larry (Jeanne) Barnes of Wayland, Jim (Kathy) Barnes of Six Lakes, Beverly (Tom) Reimer of Muskegon, Cathy (Dave) Ryan of California; 5 grandchildren: Geoffrey (Amy) Carlson, Jennifer Gleason, Alicia Drum, Elizabeth (Curtis) Spoor and Veronica (Jonathan) Barron; and several step grandchildren; great grandchildren, step great grandchildren and nieces and nephews. In addition to his parents and his spouses Darrel was preceded in death by 2 infant brothers in 1931 Roy & Ray Barnes; his siblings: Harold, Lawrence, and Percy Barnes, Norma Lickley, Irma Warden, Lois Jean Goodwin and Bertha Vincent; and 2 daughters: Nancy Seberry in 2001 and Vickie Drum in 2012. Memorial services will be held 11:00 AM, Monday, May 16, 2022 at Augustana Lutheran Church in Tustin with Pastor David Selleck officiating. Friends may meet the family prior to services at the church. Darrel’s final resting place will be Burdell Township Cemetery in Tustin. In lieu of flowers memorial contributions may be made to Ravenna United Methodist Church or Hospice of Michigan. An online guestbook is available at www.petersonfh.com.

Darrel Eugene &#8220;Red&#8221; Barnes of Cadillac formerly of Ravenna passed away Tuesday, May 10, 2022 at Green Acres Retirement Living in Cadillac. He was 93. Darrel was born on August 17, 1928 in Manton to Percy Eugene & Emma Velma (Longstreet)... View Obituary & Service Information

The family of Darrel Eugene "Red" Barnes created this Life Tributes page to make it easy to share your memories.

Send flowers to the Barnes family.