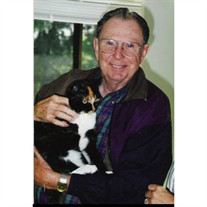 Darwin Taylor Carlson, of Cadillac, died peacefully on Sunday, December 30, 2012, surrounded by his loving family. He was 93. Darwin was born in Cadillac on May 9, 1919, to Eldon and Marguerite (Kelly) Carlson. After graduating, he worked for General Motors and was drafted in May 1941. During training, he and fellow trainees learned about the Japanese attack on Pearl Harbor. He was sent to Hawaii with the 75th Coast Guard Artillery Battalion. When he sailed into Pearl Harbor, Darwin witnessed the destruction first-hand. After 18 months of training for a second invasion in Hawaii that never happened, Darwin volunteered to be a radio operator on a B-24 Liberator bomber. Promoted to staff sergeant, he was assigned to Italy. Darwin flew with the 461st Bomb Wing of the 15th Air Force. For the B-24 crews of the 15th Air Force, each mission became an exercise in beating the odds. \"These men went up in planes that had skins so thin you could stab a pencil through them. They flew over hostile territory, knowing that a single, well-placed bullet could bring them down.\" Losses were so great that every two months, the entire force had to be replaced.The men knew this, but they still climbed into those planes. He completed nine combat missions by April 1944. On a bombing mission over Romania, his plane encountered anti-aircraft fire so heavy \"you could walk on it.\" With a hole in the wall of the plane and one man dead, they landed and rolled off the end of the runway. The plane literally broke apart during the crash landing. Darwin was hospitalized with shrapnel wounds. While recovering, he learned that his crew was shot down on a subsequent mission. There was one survivor. After the war, he returned to Cadillac, the hometown he loved. One night at the Pines, he flirted with a young newspaper reporter. He married Jean Shirley Powers in 1945, and they had three children. He owned Schoff Shoe Store for many years, sold real estate, and in retirement worked at the Cadillac Country Club. He was a reading mentor for the Wexford County Probate and Juvenile Court, a life-long member of the Elks Club and had served as a deacon in the First Presbyterian Church of Cadillac. He will be remembered for suffering without complaint from an ongoing, debilitating illness and for his many humorous comments and observations. Most of all, he will be remembered as a devoted father and husband, a man always deeply in love with his wife of 67 years. Survivors include children Craig (Sabrina) Carlson and Sue Carlson of Anna Maria, Fla; Martha (Hermann) Suhs of Cadillac; sisters Marge Mattison and Mary Ann (Don) Thurston of Cadillac; plus many grandchildren. He was preceded in death by his wife, Jean, his parents, and a sister, Catherine (Carlson) Kedrowski. Visitation will take place on Thursday, January 3, 2012, from 12:30 to 1:30 p.m. at Peterson\'s Funeral Home in Cadillac, followed by a memorial service with military honors at 1:30 p.m. Judy Coffey, parish assistant of the United Methodist Church, will officiate. Green Acres of Cadillac and Hospice of Michigan provided dignified and loving care to our father, and the family is extremely grateful for all of the special attention given during Darwin\'s illness and death. Memorial contributions may be made to Hospice of Michigan.

Darwin Taylor Carlson, of Cadillac, died peacefully on Sunday, December 30, 2012, surrounded by his loving family. He was 93. Darwin was born in Cadillac on May 9, 1919, to Eldon and Marguerite (Kelly) Carlson. After graduating, he worked... View Obituary & Service Information

The family of Darwin Taylor Carlson created this Life Tributes page to make it easy to share your memories.

Send flowers to the Carlson family.