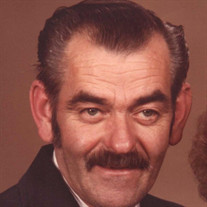 David Orrin Richardson of Cadillac passed away, Thursday, April 7, 2022 At Munson Healthcare Cadillac Hospital. He was 84. Dave was born November 7, 1937 in Muskegon, Michigan to Orrin Robert and Vivian Eilene (Stone) Richardson and they preceded him in death. Dave graduated from Cadillac High School in 1957. He went into the United States Navy after graduation and served honorably. Dave then went on to attend specialized courses at Ohio State University in horticulture. He worked at his family’s businesses, Richardson’s Green houses and Erickson’s Flowers for many years, until the business sold. He then worked at Cadillac Auto Refinishing until his retirement. He was a member of Grace Community Bible Church in Cadillac. Dave was an outdoorsman and enjoyed hunting, fishing and camping through Northern Michigan. He was a NASCAR fan and a particuly special event was attending Michigan International Speedway with his son, Tom. On June 18, 1960 at the First Church of God in Cadillac he married Meredith A. Mason and she survives him along with their children: Debra Richardson, Thomas Richardson, Theron (Bernadette) Richardson, Penny Richardson (Cyron Vincent); 15 grandchildren; nine great-grandchildren; sister, Arlene Scholten; sister-in-law, June Richardson; many nieces and nephews and special friend Dan Dahlstrom. In addition to his parents he was preceded in death by a brother, Dale Richardson; daughter-in-law, Juanita Richardson; in-laws, Warren and Elizabeth Mason; brothers-in-law, Theodore (Norma) Mason and Mel Scholten. Memorial services will be held 11:00 AM, Saturday, April 30, 2022 at Grace Community Bible Church with Pastor Hersel Wing officiating. Friends may meet the family one hour prior to the service at church. A luncheon will follow the service. Memorial contributions may be made to Council on Aging (Meals on Wheels), Grace Community Bible Church or the Animal Shelter of your choice. An online guestbook is available at www.petersonfh.com.

The family of David Orrin Richardson created this Life Tributes page to make it easy to share your memories.

Send flowers to the Richardson family.