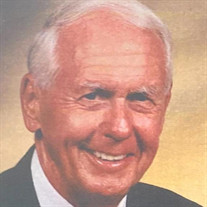 Dr. Donald Harvey Lakin, oldest child of Harvey and Ruth Lakin, was born on June 17, 1930. He died, February 1, 2022, passing over to join the great cloud of witnesses. He was 91 years old. Don was raised on the east side of Detroit. After graduation from high school, Don attended the Detroit Institute of Technology and then the Pennsylvania College of Optometry, from which he graduated in 1953 with his Doctor of Optometry (O.D.) degree. Dr. Lakin practiced in the Detroit area for over thirty years, establishing what is now Family Eye Care Associates. In the 1980s, he began working with the Michigan College of Optometry at Ferris State University and affiliated with what is now Advanced Optometry in Cadillac. Dr. Lakin was a leader in optometry and optometric education. The Michigan Optometric Association recognized him with a Lifetime Achievement Award and for five years he chaired the Association of Practice Management Education. He retired from the College of Optometry in 2000 as an associate professor. Dr. Lakin and his wife, Pat, bought a cottage on Lake Mitchell in 1970. They became full-time Cadillac residents in 1985. Don was a founding board member of the Cadillac YMCA and played an instrumental role in the capital campaign resulting in construction of the Cadillac Area YMCA Dillon Community Center. Don served on the Cadillac Area Schools Board of Education from 1988 to 2000 and was a long-time member of the Kiwanis Club of Cadillac. He is a former member of Christ United Methodist Church in Detroit and the Cadillac United Methodist Church. For the last eight years, the Cadillac Congregational Church (U.C.C) has been Don’s church home. Don and Pat Lakin’s contributions to the Cadillac community were recognized in 2011 by the Cadillac Area Community Foundation with recognition as Philanthropists of the Year. Don was preceded in death by his wife, Pat, in 2013, after nearly 62 years of marriage. He was also preceded in death by a daughter, Candy Lakin in 2011, a daughter-in-law, Barbara Lewis-Lakin in 2021, and a great granddaughter in 2013. Pat Steinhour, dear friend, and companion in the last years of his life, survives him, as do family members Bill Lakin, Jean Lakin, Cindy Morley, Mark Morley, Shawn Lewis-Lakin, John Smith, Kim Clark and Jennifer Clark, 12 grandchildren and 13 great grandchildren. Don is remembered by his family as a man who worked hard and played hard, providing for his family, and caring for his community. He enjoyed water skiing, sailing, swimming, bicycling, snow skiing, driving convertibles, and reading. In his 70s he completed multiple Pedal Across Lower Michigan and Michigander bicycle tours with his children and grandchildren. Don continued to both ski and bicycle into his 80s (and yes, the wisdom of his doing so is questionable). The family is grateful for the care and support Don received from Green Acres Assisted Living and from Hospice of Michigan during the final years and months of his life, respectively. A celebration of Don’s life will be held on Saturday, June 18, 2022, the day after what would have been his 92nd birthday. Early in June, service details will be published at www.petersonfh.com (you may also call the funeral home at 231-775-3411). Memorial contributions in Don’s name may be made to the Cadillac Area YMCA, 9845 Campus Dr., Cadillac, MI 49601 or www.cadillacareaymca.org.

Dr. Donald Harvey Lakin, oldest child of Harvey and Ruth Lakin, was born on June 17, 1930. He died, February 1, 2022, passing over to join the great cloud of witnesses. He was 91 years old. Don was raised on the east side of Detroit. After... View Obituary & Service Information

The family of Dr. Donald Harvey Lakin created this Life Tributes page to make it easy to share your memories.

Send flowers to the Lakin family.