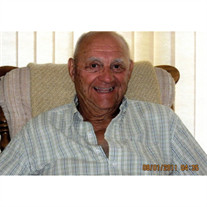 Donald Boyan Spolyar, 87, of Cadillac, peacefully passed away on September 10, 2014, with his family by his side. He was stricken by a stroke 4 days earlier. Born to the late John and Amelia Spolyar on November 3, 1926 in Detroit, Donald attended Harrietta and Mesick schools, graduating in 1945. Just 23 days after graduation, he was inducted into the Army during WWII, serving for over two years. He attended Wayne State and Central Michigan College, graduating in 1952 with a Bachelor's Degree in Education. Before he began teaching, he worked in Detroit for GM in a tool and die shop and at Detroit Transmission Division. In 1955, Don started teaching in Brethren then transferred to Cadillac Public Schools in 1957, teaching driver's education and Business classes, retiring in 1987. He was loved and respected by many students and staff alike. Along with his teaching career, Don owned and managed a Christmas tree business since 1971, where some of his trees were shipped as far south as Florida and west to Arizona. He maintained a tree lot in Flint among other places for over 25 years. Many of his tree grower friends stated that Don was a man of "Character and IntegrityÃ¢â‚¬Â . It was common to see some of Don's students trimming and harvesting Christmas trees during the busy season, most obtaining first job experience. As the oldest of seven children, Don was known as the patriarch of the Spolyar family. He helped raise his siblings on the farm as his dad worked in Detroit. He loved to dance, gamble, travel, play cards with friends and enjoyed his daily Freecell computer game. He skied and bowled for many years. Don was a member of the Elks Lodge #680, American Legion, and Mesick Masonic Lodge. In 2001, Don was married to Margaret (M.J.) Lanning, in a family destination wedding in Las Vegas, NV and she survives him along with; children: Sara (Darrin) Zimmerman of Alpena, David (Jo Ellen) Spolyar of Lake Orion, Julie Nino of Grand Rapids and Kurt Kostbade of Grand Rapids; stepchildren: Keri Lanning of Cadillac; Duane (Roberta) Lanning of Dubuque, Iowa. Don is also survived by eleven grandchildren, three great-grandchildren, and many nieces, nephews and other loving family members. His siblings: Joan (Gene) Kelly of Harrietta, Mary Ann Oren (Bob Boekenkamp) of Sun City, AZ, John (Liane) Spolyar of Troy, Jim (Sybille) Spolyar of Las Vegas, NV and Amelia (Clive Cantor) of West Bloomfield.. Don was preceded in death by his parents, John and Amelia Spolyar; former wife, Evelyn Spolyar; sister, Stephanie; brother-in-law, Joe Ris and granddaughter, Olivia Spolyar. In lieu of flowers, memorial contributions can be made to the Harrietta Civic Club, P.O. Box 61, Harrietta, MI 49638 or The LEAGUE Michigan, 330 Marshall Street, Suite 200, Lansing, MI 48912, a youth leadership organization, in his granddaughter Olivia's name. Please join in the celebration of his life at McGuire's Terrace Room in Cadillac, from 12-3:30 p.m. on Saturday, September 13, 2014. An online guestbook is available at www.petersonfh.com.

Donald Boyan Spolyar, 87, of Cadillac, peacefully passed away on September 10, 2014, with his family by his side. He was stricken by a stroke 4 days earlier. Born to the late John and Amelia Spolyar on November 3, 1926 in Detroit, Donald attended... View Obituary & Service Information

The family of Donald Boyan Spolyar created this Life Tributes page to make it easy to share your memories.

Send flowers to the Spolyar family.