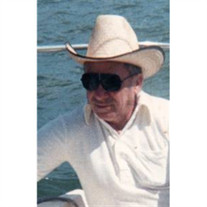 Donald Whitmore Teed, of McBain, passed away on Thursday, May 10, 2012, at the Maple Ridge Assisted Living Center in Lake City. He was 85. He was born on September 21, 1926, in Sherman to Stanley and Mary (Munn) Teed. He married Edith Hayden in 1953 in Pontiac, and she preceded him in death in 1963. He married Hannah Boyce on April 29, 1972, in Lansing, and she preceded him in death on June 12, 2003. He graduated from Lake City High School and had worked hard all his working years. He was a machinist in the automobile parts industry, worked for Rochester Gear in Rochester, Northwood Manufacturing in Cadillac for 17 years and part-time for Pine Tech in Lake City. He retired in 1997. He served in the U.S. Army during World War II under Gen. McArthur in the Pacific Theater and the liberation of the Phillipines. He had been a member of the Charlton-Polan Legion Post No. 233 at Lake Orion and presently a member of the Jackson Koster Gray Post No. 300 in Lake City. He was a member of the First Presbyterian Church at McBain. He enjoyed hunting, working and farming. The family would like to thank the Maple Ridge Assisted Living Center for the loving care given to Don during the past year. It was greatly appreciated. He is survived by his children, Patrick (Nancy) Teed of Lake City, Mary Dorland of Pearland, Texas, Donna (Robert) Marcus of McBain, Patricia (Thomas) Cardinal of Riverdale; 12 grandchildren, 18 great-grandchildren and one great-great-grandchild; siblings, Barbara Hollis of Wyoming, Sally Foust of Lake Havasu, Ariz., Margaret Forbes of McBain; sister-in-law, Wanda Teed of Moorestown; and many nieces and nephews. He was preceded in death by a son, David Teed; brother, Malcolm Teed; in-laws, Glyone Forbes, Jerry Hollis, Donald Foust and Frank Hayden. Funeral services will be held at 11 a.m. on Monday, May 14, 2012, at the First Presbyterian Church in McBain, with the Rev. David Weber officiating. Burial will be in the Clam Lake Township Cemetery in Wexford County. A visitation will be held from 4 to 7 p.m. on Sunday, May 13, 2012, at the Burkholder Funeral Home in McBain. Memorial contributions can be made to Heartland Hospice. A guest book is available at www. petersonfh.com.

Donald Whitmore Teed, of McBain, passed away on Thursday, May 10, 2012, at the Maple Ridge Assisted Living Center in Lake City. He was 85. He was born on September 21, 1926, in Sherman to Stanley and Mary (Munn) Teed. He married Edith Hayden... View Obituary & Service Information

The family of Donald Whitmore Teed created this Life Tributes page to make it easy to share your memories.

Donald Whitmore Teed, of McBain, passed away on Thursday, May...

Send flowers to the Teed family.