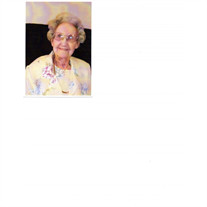 Doris Irene Brink-Brush of Ellerslie, Georgia went home to be with her Lord on Monday, March 25, 2013 in Columbus, Georgia. She was 98. She was born January 18, 1915 to Victor C. & Stella A. (Tyler) Peterson in Cadillac. She graduated from Cadillac Sr. High School in 1932. On August 28, 1937 she was united in marriage with William H. Brink in Cadillac and they were married 51 years until his death in March of 1988. She enjoyed sewing, upholstering and caring for her family. She was employed at H.L. Green Stores, J.C. Penney and was department head at Milikens Department Store until her retirement in 1973. Then they wintered in Lakeland, FL and spent summers in Cadillac. She was a member of First Baptist Church in Cadillac where she was Sunday School Superintendent, taught Sunday school and was very active in Women's Missionary Fellowship and in 1970 traveled to visit American Baptist Mission Fields in India, Burma, Nepal and the Jerusalem areas. She was a charter member of The American Baptist Church of Lakeland, FL. Then on Oct. 14, 1989 she married Joseph P. Brush of Lakeland, FL until his death in 2003. In January of 2010 she moved to Georgia to live with her daughter & son-in-law in Ellerslie, Georgia and faithfully attended Cornerstone Baptist Church there. Survivors include five children; Richard (Diane) Brink of Indiana, Nancy (Orville) Gee of Muskegon, MI, Marilyn (John) Shier of Ellerslie, GA, DeAnna (Ronald) Doll of Zeeland, MI and Allen Brink of Lakeland, FL, 10 grandchildren: Richard Greeley, Beth Anne Brink-Cox, Paul Brink, Lori Jean Yonkman, Janice Larson, Carole Schindlbeck, Julinda Shier-Miller, David Shier, Corey Doll & Carson Doll; numerous great-grandchildren and several great-great-grandchildren plus many nieces and nephews. She was preceded in death by a daughter Janice, husbands, William H. Brink and Joseph P. Brush and siblings Gladys Fagerman, Clara Peterson & Clarence Peterson Doris always had a strong love for her Lord, Jesus Christ and loved to witness to others. She is now celebrating in Heaven with her Lord and all of those friends and family who have gone before her. Funeral services will be held 11:00 AM Friday, March 29, 2013 at Peterson Funeral Home in Cadillac with Rev. David McMahon officiating. Visitation will be from 6-8 PM Thursday at the Funeral Home. Burial will take place at Maple Hill Cemetery in Cadillac. An online guestbook is available at www.petersonfh.com.

Doris Irene Brink-Brush of Ellerslie, Georgia went home to be with her Lord on Monday, March 25, 2013 in Columbus, Georgia. She was 98. She was born January 18, 1915 to Victor C. & Stella A. (Tyler) Peterson in Cadillac. She graduated from Cadillac... View Obituary & Service Information

The family of Doris I. Brink-Brush created this Life Tributes page to make it easy to share your memories.

Doris Irene Brink-Brush of Ellerslie, Georgia went home to be...

Send flowers to the Brink-Brush family.