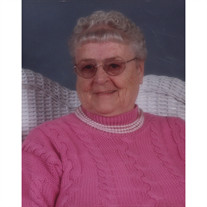 After a long life filled with much love, Dorothy Baker was promoted to glory on April 30, 2012, surrounded by loved ones at home. She was 92. Dorothy was born January 12, 1920 in Evart, Michigan, to Emory and Daisie Bell. She attended Whittier, Lincoln, Cass Elementary and Cadillac High School. In her early working years, she was a nurse\'s aide, a waitress and sales clerk. In 1959, she moved to Chicago and worked as a receptionist at The Salvation Army\'s Emergency Lodge for Mothers & Children. In 1961, she married Richard H. Baker in Chicago. In 1966, she moved to Detroit, where she and Dick were managers of the Salvation Army\'s Emergency Lodge. Most of her jobs throughout her working life were with The Salvation Army, such as managing the thrift store in Abilene, Texas, working with The Salvation Army\'s Adult Rehabilitation Center in Evansville, Ind., and managing the Cadillac thrift store from 1982 to her retirement in 1996. She continued work as a recess aide with Cadillac Area Public Schools and later volunteered with the Foster Grandparents Program. She enjoyed the calls of â€œHi, Grandma!â€ wherever she went. Dorothy lived an active, full life. She enjoyed traveling with her family and spending time with her many â€œpool buddiesâ€ at water aerobics. She loved and served God for over 55 years through The Salvation Army\'s many church programs including; Women\'s Home League Chaplain and Secretary, Sunday school teacher and the highest lay position as Corps Sergeant Major. Even in her last few years, she welcomed people receiving assistance at The Salvation Army\'s front desk here in Cadillac. Dorothy is survived by one daughter, Judy (Leonard) Gilde Sr., two sons, Larry (Lynda) Johnson I, Arnold (Shirley) Johnson, son-in-law Bruce Ringstrom, two step-daughters, Clara Lou (Don) Parker, Connie (Terry) Simpson, 25 grandchildren, 43 great-grandchildren and 30 great-great grandchildren, two sisters, Donna Moorhead, Dorla (Hank) Vanderjagt and brother Emory Bell. She was preceded in death by her parents, husband Richard, daughter Donna M. Ringstrom, step-daughter Sara Fitzgerald, and six sisters. Funeral services will be held at The Salvation Army Citadel, 725 Wright St., Cadillac, MI at 11:00 AM Saturday, May 5, 2012 with Captain Mark Nance officiating. Burial will be at Maple Hill Cemetery in Cadillac. Friends may meet the family from 6-8 PM Friday at Peterson Funeral Home in Cadillac. Memorial contributions may be made to The Salvation Army. An online guestbook is available at www.petersonfh.com.

After a long life filled with much love, Dorothy Baker was promoted to glory on April 30, 2012, surrounded by loved ones at home. She was 92. Dorothy was born January 12, 1920 in Evart, Michigan, to Emory and Daisie Bell. She attended Whittier,... View Obituary & Service Information

The family of Dorothy Baker created this Life Tributes page to make it easy to share your memories.

After a long life filled with much love, Dorothy Baker was promoted...

Send flowers to the Baker family.