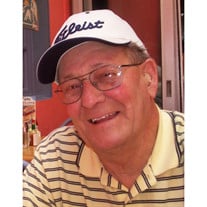 Douglas Henderson Bell passed away Wednesday morning, July 4, 2012, at Mercy Hospital in Cadillac. Doug spent most of his early career in manufacturing in Ontario, Canada; Erin, Tenn., and Cadillac, with the N.A. Woodworth Company. He was plant manager of Northwood Manufacturing in Cadillac, and retired after 20 years from the Wexford-Missaukee Vocational School as a machine trades instructor. Aviation had been Doug\'s love since childhood. He worked on the famous Canadian Jet, the Avro Arrow, and, after moving to Cadillac, he became a private pilot, owning several aircraft prior to building his open cockpit AcroSport bi-plane and a Vans RV-8. He was one of the founders of Cadillac\'s Local Chapter of the Experimental Aircraft Association, Chapter 678. In his retirement, Doug designed and manufactured a tail wheel assembly for the Vans RV series of aircraft, hundreds of which have been shipped to aviators worldwide. He was very active all his life with a wide array of interests. Though sitting on the back deck with wife, Mary, was his favorite pastime of late, they were longtime members of the Cadillac Country Club, where they both enjoyed golfing and socializing. Doug also enjoyed hunting, fishing, boating, water and snow skiing, swimming and diving, playing cards, snowmobiling and traveling to Canada and around the country to see his family. Anyone who knew Doug knew his dogs - from hunters brought with him from Tennessee to the golden retrievers that were his constant companions later in life. Doug and his wife became naturalized U.S. Citizens in 1968, and so it is fitting that he took his â€œlast flightâ€ on July 4th, Independence Day. Visitation will be at the Peterson Funeral Home on Friday, July 6, 2012, from 6 to 8 p.m. and at the United Methodist Church on Saturday, July 7, 2012, at 2 p.m. Doug\'s life will be celebrated at the United Methodist Church at 3 p.m. with Parish Assistant Judy Coffey officiating. He is survived by his wife of 65 years, Mary; his five children, Mike (Leslie) of Cadillac; Linda Bell Ziska of Canadian Lakes; Sandy Bell Woodall of Bartonville, Texas; Jo (Cheryl) of Toronto, Ontario, and Doug (Ann) of Manistee; seven grandchildren, Micah (Beth) Bell of Valparaiso, Ind., Ian (Betsy) Ziska of Big Rapids, Colin (Renee) Ziska of Mattawan, Rory Meyer of Colorado Springs, Rachel Meyer of London, Ontario, Hannah and Blake Davis of Manistee; and four great-grandchildren, Evan and Camden Bell of Indiana, and Ari and Cash Ziska. Doug was preceded in death by his parents, William and Mary Bell of Hespeler, Ontario, Canada, and sister Violet (Bell) Struthers of Dallas. In lieu of flowers, Doug would appreciate donations to Hospice of Michigan, National Kidney Foundation of Michigan, or the Library for The Blind - Traverse Area District Library.

Douglas Henderson Bell passed away Wednesday morning, July 4, 2012, at Mercy Hospital in Cadillac. Doug spent most of his early career in manufacturing in Ontario, Canada; Erin, Tenn., and Cadillac, with the N.A. Woodworth Company. He was... View Obituary & Service Information

The family of Douglas Henderson Bell created this Life Tributes page to make it easy to share your memories.

Send flowers to the Bell family.