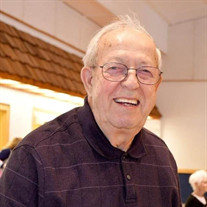 It is with a heavy heart that we say goodbye to Duane Clifford Larr, 85, who was called home to heaven on February 4, 2022, with his loving family by his side. Duane was born to Dee and Minnie (Trevithick) Larr on December 31, 1936, in Manton. Duane attended Shippy School and graduated in 1955 from Manton Schools. He served in the National Guard from January 1954 through January 1962 with the 46thInfantry Division. On May 10, 1958, he married the former Sharon Bishop at the Temple Hill Baptist Church in Cadillac, with Pastor Walter Malmstrom officiating. He worked at Town Talk Gas Station in Cadillac, then moved onto Wedin International Manufacturing, before becoming a partner with McDaniel and Larr Standard Gas Station and retired in 2001 from Rempco, Inc. in Cadillac. He lived in the Manton/Cadillac area his entire life, raising his family a few miles from his childhood home. He and Sharon welcomed their first daughter and two sons, and later decided to expand their family when they adopted and welcomed their youngest two daughters. He became a member of Rollins Christian Fellowship Church as a young adult and returned after moving back to Manton. While living in Cadillac, he attended Selma Street Methodist Church. He volunteered for many church dinners and luncheons, and served as a greeter. He enjoyed camping, golf, fishing and especially ice fishing and hunting with his family and special cousin, Dale Larr.He bowled many years on the Bowling League in Manton and played men’s league softball at Lincoln Field in Cadillac. He was a fan of baseball and watching the Detroit Tigers.He chased his children, grandchildren and great-grandchildren to their sporting events covering the upper and lower peninsula as well as events out of state. Duane was a man of few words but his fun-loving random phrases are memorable. He was a man who truly loved unconditionally,and was an extremely patient and humble man. He was not afraid of hard work and he was a humorous guy that could put a smile on anyone’s face. He enjoyed traveling and camping with his family and made wonderful memories including the mission trip when he and Sharon traveled to Brazil. He passionately relished his homemade ice cream and pie.He would help anyone in need and was a gentle-soul. There was never a person he did not like and he never denied a hug from the ladies at church.His greatest love was his family but he thoroughly cherished his time spent with his grandchildren and great-grandchildren. Duane was a kindhearted and caring husband, father, grandfather, great-grandfather, brother, uncle and friend, who will be deeply missed by so many. He is survived by his loving wife of 63 years, Sharon Larr; his children: Kathy (Larry) McKinley of Cadillac, Brian (Shelia) Larr of Manton, Tim (Cindy) Larr of Cadillac, SuLyn Weaver of Belmont, and LeAnn (David) Skiff of Manton; grandchildren: Heather (Randy) Reed, Patty Larr (Rob Kreisman), Josh (Karli) McKinley, Ashley (Bob) Larr-Verdi, Tony (Ruby) Larr and Brianna Larr (Sean Alspaugh), Kristi Weaver and Matthew Weaver and step-grandchildren: Andrea (Michael) Christensen and Brad Gullekson; 19 great-grandchildren and 2 great great-grandchildren. He is also survived by sister, Shirley Saari; brothers, Rodney (Karen) Larr and David Larr; sister-in-law, Valerie Larr and brother-in-law, John (Lois) Bishop; aunt, Marilyn Peek, several nieces and nephews and many special cousins. He is preceded in death by his parents; parents-in-law, Orman and Ione Bishop; brother, Marlin Larr; brothers-in law, Darrell Williams, Sr. and Oliver Saari; sister-in-law Vicki Larr and nephew, Darrell Williams, Jr. The family would like to thank Duane’s caregiver Jaime Stickels, Munson Hospice and his family members who were so attentive caring for him in his final days. Funeral services will be held 11:00 AM, Wednesday, February 9, 2022, at Rollins Christian Fellowship Church in Manton. Friends may meet the family Tuesday, from 4:00 to 7:00 PM at the church and an hour prior to the service Wednesday. Burial will take place at Fairview Cemetery in the spring. In lieu of flowers memorial contributions may be made to Rollins Christian Fellowship Church or Munson Hospice. An online guestbook is available at www.petersonfh.com.

It is with a heavy heart that we say goodbye to Duane Clifford Larr, 85, who was called home to heaven on February 4, 2022, with his loving family by his side. Duane was born to Dee and Minnie (Trevithick) Larr on December 31, 1936, in Manton.... View Obituary & Service Information

The family of Duane Clifford Larr created this Life Tributes page to make it easy to share your memories.

It is with a heavy heart that we say goodbye to Duane Clifford...

Send flowers to the Larr family.