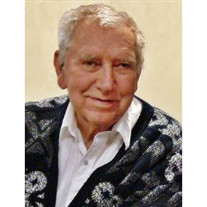 Earl E. Schepers, of Hudsonville, formerly of McBain, joined many of his friends and family at Jesus\' feet on Saturday, May 26, 2012. He was 90. He passed quietly with family at his side. He was born in Grandville on Novmeber 29, 1921, to Albert and Lena (VanHaitsma) Schepers. Earl served in the Pacific Theater during World War II, earning the Bronze Star and Purple Heart. When he came home, he married Henrietta Klifman on February 1, 1946, at the Lucas Christian Reformed Church. They lived and served in the McBain and Falmouth area most of their 65 years of together. Henrietta went to be with the Lord last year. He was an active member of the Falmouth Reformed Church, serving as Sunday School superintendent, deacon and elder. In later years, Earl and Henrietta served as church custodians. They raised seven children who learned love and respect at their knee. He worked for Kysor Industrial of Cadillac for many years. He was a good mechanic ,and as a younger man, when not working on the family car, would often be working on the car or tractor of a neighbor or co-worker. He enjoyed his family and was very contented with a simple lifestyle. He is joining those who went before: his parents, Albert and Lena Schepers; in-laws, Henry and Freida Klifman; siblings, Marguerite and Ray Radsaek, Sid and Mae Schepers, Mildred Genton; in-laws, Frieda Dunbar, Gerrit Klifman, George and Marian Klifman, Leonard Klifman, Bill Pols, John Klifman, Mary Johnson and Fannie Timmerman. He is survived by his children, Roy (Darla) Schepers of Evart, Bruce (Linda) Schepers of Carlsbad, N.M., Steve (Charlotte) Schepers of Linden, Tenn., Rita (Vel) Border of New Port Richey, Fla., Betty (Larry) Doll of Hudsonville, Ed (Kim) Schepers of Cadillac, and Bonnie (Doug) Watson of Cadillac; 15 grandchildren, 22 great-grandchildren and one great-great-grandchild; sisters and brothers-in-law, Whiley Timmerman of Middleville, Florence Pols of Hudsonville, Ellie Klifman of Lake City, Hank and Wilma Klifman of Grandville, Roger and Eleanor Rozeveld of Hudsonville, Howard Dunbar of Pheonix, Ariz., Dorothy Klifman of Byron Center, Vernon Johnson of Cadillac, and Maurice Genton of Madisonville, Ky.; many nieces and nephews. Funeral services will be at 3 p.m. Wednesday, May 30, 2012, at the Falmouth Reformed Church, with the Rev. Robert Hekhuis officiating. Burial will be in the Falmouth Cemetery, and graveside services will be conducted by the Cadillac Area Honor Guard. Visitation will be one hour prior to the service at the church on Wednesday. Memorial contributions may be made to the Falmouth Reformed Church. Burkholder Funeral Home in McBain was in charge of the arrangements. An online guestbook is available at www.petersonfh.com.

Earl E. Schepers, of Hudsonville, formerly of McBain, joined many of his friends and family at Jesus\' feet on Saturday, May 26, 2012. He was 90. He passed quietly with family at his side. He was born in Grandville on Novmeber 29, 1921, to... View Obituary & Service Information

The family of Earl E. Schepers created this Life Tributes page to make it easy to share your memories.

Send flowers to the Schepers family.