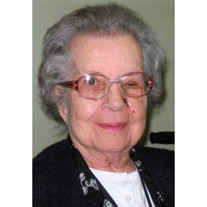 Edith Esther Quist, of Cadillac, formerly of McBain and Lake City, died Friday, July 27, 2012, under the compassionate care of Sunnyside Senior Living in Cadillac at the age of 90. Edith was born on May 30, 1922, in Lucas, to Richard and Otilly (Gloff) Elenbaas. Edith graduated from the McBain High School and had been employed by BF Goodrich in Cadillac, Riverside Electric in Marion and retired from Manton Industries in 1982. She was a lifelong member of the Emmanuel Lutheran Church of Cadillac and was a member of the missionary league. She enjoyed her children, grandchildren and great-grandchildren, her many friends, playing cards, crocheting, taking walks and her winters in Florida. Edith married Quenton John Quist at the Elenbaas family home in Riverside Township on November 20, 1941, and he preceded her in death on June 25, 1997. They had three children who survive them, Jeanne (Karl) Murphy of Pearland, Texas, Donald (Beth) Quist of McBain, and Mary (Dennis) Greeley of Tustin. She was fortunate to have nine grandchildren and 19 great-grandchildren. Also surviving her are two brothers, Harold (Pat) Elenbaas of Otsego, and Ray (Angie) Elenbaas of Jenison, also a sister Dorothy Shelton of Flint. Step-siblings surviving are Ken (Iva) Bekken of Marion, Ed Bekken of McBain, Gertrude Marcus of McBain, and Francis Bekken of McBain. In-laws include Marion Elenbaas of Grandville, Anita Elenbaas of Plant City, Fla., Joannie Elenbaas of Bay City, Kathy Elenbaas of Manistee, and Ivan (Marjorie) Quist of McBain. She was preceded in death by her parents; a daughter, Shirley Ann; her brothers, Marvin, Gordon, Arthur, Wilbur, Clayton; and in-laws, Mae Elenbaas, Elton Shelton, Claude Marcus and Clifford (Angeline) Quist. Funeral services will be held at 11 a.m. Monday, July 30, 2012, at the Emmanuel Lutheran Church of Cadillac, and officiating will be Pastor Joel Hess. Burial will be at 2:30 p.m. on Monday, July 30, 2012 at the Mount View Cemetery at McBain following a luncheon at the church. A visitation will be held Sunday from 7 to 9 p.m. at the Burkholder Funeral Home in McBain. Memorial contributions may be made to the church or the Sunnyside Senior Living. A guestbook is available at www.petersonfh.com.

Edith Esther Quist, of Cadillac, formerly of McBain and Lake City, died Friday, July 27, 2012, under the compassionate care of Sunnyside Senior Living in Cadillac at the age of 90. Edith was born on May 30, 1922, in Lucas, to Richard and Otilly... View Obituary & Service Information

The family of Edith Esther Quist created this Life Tributes page to make it easy to share your memories.

Edith Esther Quist, of Cadillac, formerly of McBain and Lake...

Send flowers to the Quist family.