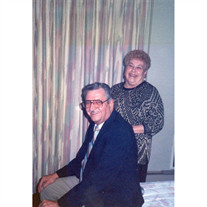 Edward James Williams of Cadillac passed away unexpectedly on July 10, 2011. He was 80 years old. He leaves behind his son, Edward Jr., three wonderful grandchildren whom he loved with all his heart, Bobbi, James, and Sandra, 8 great grandchildren, and Sister Carol Conrady. He is predeceased by his beloved wife of 51 years, Dolores, and his sister Betty Remondini. He was born on May 12, 1931 to Hjalmer and Celia Williams of Stambaugh, Michigan. He grew up during the Depression and when he was older worked his grandparents farm in Upper Wisconsin. He also worked on other farms during summer and would bring home a stack of quarters each year to help buy his school clothes for the year. He graduated from Stambaugh High School in 1949, and lettered in basketball and enjoyed ski jumping. Soon after high school, he joined the Navy and was stationed in Hawaii and Alaska. Upon completion of service, he opted to not work in the ore mines of the Upper Peninsula and moved to Ann Arbor where he worked briefly for the Railroad and Kaiser Fraser Auto Company. He then moved to Lansing to work for Oldsmobile and finally moved to the Board of Water and Light, where they were paying 15 cents more per hour. He worked for BWL for 30 years as a Laborer, Foreman, and General Foreman. It was in Lansing where he met his wife Dolores and married her on November 24, 1956. In 1961, they had one child, Edward Jr, and lived in Lansing until retiring to Cadillac in 1986. He played softball into his mid 40s, was an avid bowler, fisherman, and golfer. He was the undisputed best Euchre player everywhere he went (just ask those who played with/against him). His love for his wife, family, friends, people, and establishments (Cadillac Party Bar, Elks, McGuire\'s, Helsels) made his life in Cadillac a wonderful place to live. He always was there for everyone and always loved a good time. His pure kindness, one-liners, laughter, and hard pats on the back will be sorely missed. He loved his family dearly and was a pure joy to be around. Although we will miss him terribly, the memories will last forever. Funeral services will take place on Friday, July 15, 2011, at 12:30pm at Peterson Funeral Home in Cadillac with his nephew Pastor Norman Oberlin officiating. Visitation will also be Friday at 10am-12:30pm at Peterson Funeral Home. Memorial contributions can be made to the Salvation Army. Burial will be at the Stambaugh Cemetery in Stambaugh, Michigan, on July 18, 2011, at 1pm. An online guestbook is available at www.petersonfh.com.

Edward James Williams of Cadillac passed away unexpectedly on July 10, 2011. He was 80 years old. He leaves behind his son, Edward Jr., three wonderful grandchildren whom he loved with all his heart, Bobbi, James, and Sandra, 8 great grandchildren,... View Obituary & Service Information

The family of Edward James Williams created this Life Tributes page to make it easy to share your memories.

Edward James Williams of Cadillac passed away unexpectedly on...

Send flowers to the Williams family.