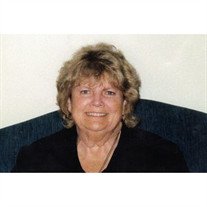 Eileen Ann Carlson 72, of Cadillac, Michigan passed away September 18, 2012. Eileen was born November 29, 1939 in Boston, MA. She was the proud daughter of Georgetown Law School graduate, George Francis and elementary teacher, Eileen Frances (White) Connors. Her strong Boston-Irish-Catholic upbringing guided her throughout her life; she loved the Red Sox, and enjoyed her work at Catholic Human Services. She was an ACBL (American Contract Bridge League) member and in January 2012 attained the distinction of Silver Life Master. She was also certified as an ACBL club director. As an avid duplicate bridge player, nothing excited her more than playing at week-long bridge tournaments around the country - especially the Cape Cod and Fort Wayne tournaments with her bridge partners. She enjoyed knitting immensely, and always had a project (or several) in progress. She loved her family and we loved her dearly. It is now time for us to keep the best of her alive in how we live our lives. On December 14, 1963 in Fort Lauderdale, FL she married Edward Joseph Carlson Sr. and he survives her along with; son Edward J. Carlson Jr. both of Cadillac; and daughter, Dr. Maureen Ann Carlson of St. Louis, Missouri; sister-in-law Dorothy Connors of Dover, Massachusetts; brother-in-laws: William Carlson of Clare, G. Thomas of Grand Rapids, and Hugh (Suzanne) of Cadillac and many nieces and nephews. She was preceded in death by her loving parents; and a devoted brother, Robert Vincent Connors. The Mass of Christian burial will be held 11:00 AM September 21, 2012 at St. Ann Catholic Church in Cadillac with Msgr. Francis Murphy as celebrant. Burial will be at Mount Carmel Cemetery in Cadillac. There will be no visitation. The Rosary will be prayed one hour before the Mass begins. In lieu of flowers, memorial contributions may be made to: Catholic Human Services, Open Adoption, 1000 Hastings St., Traverse City, MI 49686 or St. Joseph Preparatory High School, (formerly Mount St. Joseph Academy), 617 Cambridge Street Boston, MA 02134-2460. An online guestbook is available at www.petersonfh.com.

The family of Eileen Ann Carlson created this Life Tributes page to make it easy to share your memories.

Send flowers to the Carlson family.