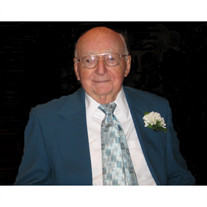 Forrest Oakley Kanipe of East Grand Rapids formerly of the Cadillac area died Sunday, January 22, 2012 in Kokomo, Indiana. He was 93. He was born on September 8, 1918 in Lake City to Peter A. & Amy L. (Wolven) Kanipe. He moved to Cadillac from Jennings and graduated from Cadillac High School in 1936. He had worked for B.F. Goodrich in Cadillac for 4 years. On July 12, 1941 in Marion he married the former Doris L. Sawyer and she preceded him in death on May 18, 2005. He attended American Aircraft Trade School in Grand Rapids in 1942 and went to Willow Run-Ypsilanti, Michigan where he worked for 2 years. In 1944 he returned to Cadillac and worked for Union Rotary. On January 22, 1946 he went to work for Chris-Craft and had been employed there for 38 years and ended his profession as production engineer. While with Chris-Craft he worked in many different plants including: Edenton, NC, Pompano Beach, FL, Holland, and Alganac, MI Chattanooga, TN and Salisbury, MD. Mr. Kanipe enjoyed trout fishing and restoring vintage Chris-Craft Boats and became known as â€œMr. Chris Craftâ€ . Forrie was a happy, positive, congenial person. He loved people and people loved him. He was a thoughtful and loving husband, father and grandfather. In 1980 he and his wife purchased a home in Bradenton, FL and enjoyed the warmth of the winter months there. In 1986 they purchased a summer home on Lake Missaukee and entertained many people and especially enjoyed their families coming to visit. Survivors include his children: Bonnie (Dean) Stolt of Kokomo, IN, Terry (Becky) Kanipe of McBain, Rick (Patty) Kanipe of East Grand Rapids, and Robin (Nancy) Kanipe of Asheville, NC; 10 grandchildren; 20 great grandchildren; brother-in-law, Todd Sawyer of Cadillac. Funeral services will be held 11:00 AM Saturday, January 28, 2012 at the Peterson Funeral Home in Cadillac with Mr. Floyd Kanipe officiating. Burial will be at Maple Hill Cemetery in Cadillac. Friends may meet the family from 6-8 PM Friday at the funeral home. In lieu of flowers you are asked to consider the American Heart Association or the Alzheimer\'s Disease Association. An online guestbook is available at www.petersonfh.com.

Forrest Oakley Kanipe of East Grand Rapids formerly of the Cadillac area died Sunday, January 22, 2012 in Kokomo, Indiana. He was 93. He was born on September 8, 1918 in Lake City to Peter A. & Amy L. (Wolven) Kanipe. He moved to Cadillac from... View Obituary & Service Information

The family of Forrest O. Kanipe created this Life Tributes page to make it easy to share your memories.

Send flowers to the Kanipe family.