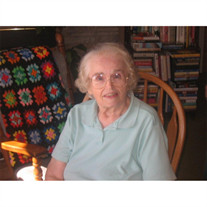 Frances Klarquist, of Cadillac, passed away Saturday evening, February 9, 2013, at the Curry House Assisted Living in Cadillac. She was 82. Frances was born on May 31, 1930 to Herman and Marian Dahlquist of Cadillac Michigan. She was married to C. Edwin Klarquist on August 20, 1952 who preceded her in death in 2005. Frances attended Cadillac High School graduating as valedictorian in 1948. She obtained her bachelor degree from Northwestern University in elementary education. She taught in the Cadillac Area Public Schools for over 20 years with the majority of those years at McKinley and Lincoln. She was perhaps best known for her talent at the piano. Frances showed an exceptional ability at a young age and won many competitions including performances at Interlochen. She became the pianist and choir accompanist at the First Covenant Church of Cadillac at the age of 11 years old Ã¢â‚¬â€œ a position she held for over 50 years. She also played for numerous weddings, funerals, and special events. A lifelong member of the Covenant Church, Frances also was a member of the Covenant Women group and other church organizations. She served many years as a Mercy Hospital Auxiliary volunteer. She was a voracious reader and also enjoyed gardening. Following the death of her husband, she became a resident of Curry House in Cadillac where she received the best of care for which her family is eternally grateful. Frances is survived by two sons, John (Kimbra) of Dallas, Texas and Thomas of Chicago, Illinois; two grandchildren, Anders (Cassidy) and Alaina, both of Dallas, Texas and one great-granddaughter. She is also survived by two sisters, Vickie (George L.) Rock of Cadillac, and Janet (Charles K.) Burridge of Kent, Washington. She was preceded in death by one son, Paul, in 2009. Funeral services will be held 1:00 p.m. Saturday, February 16, 2013 at the Peterson Funeral Home in Cadillac with Reverend Gregory DuBois officiating. Friends may meet the family Friday from 2-4 and 6-8 p.m. at the Funeral Home. Burial will be at Maple Hill Cemetery in Cadillac. Memorial contributions may be made to First Covenant Church and Mercy Hospice of Cadillac. An online guestbook is available at www.petersonfh.com.

Frances Klarquist, of Cadillac, passed away Saturday evening, February 9, 2013, at the Curry House Assisted Living in Cadillac. She was 82. Frances was born on May 31, 1930 to Herman and Marian Dahlquist of Cadillac Michigan. She was married... View Obituary & Service Information

The family of Frances Klarquist created this Life Tributes page to make it easy to share your memories.

Send flowers to the Klarquist family.