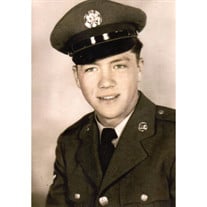 Franklin D. Geranen of Cadillac passed away Tuesday, November 20, 2012 at his home. He was 79. He was born November 21, 1932 in Lake Norden, South Dakota to Oscar William and Mamie (Isaacson) Geranen and they preceded him in death. Frank attended Cass Tech High School in Detroit and left school to go into the service. He served his country in the United States Air Force during the Korean War. He returned home and started to work at IBM and in later years for Telex Memorex until retiring in 1988. He was a member of the Knights of Columbus #1224 and of Saint Ann Catholic Church both of Cadillac. On May 2, 1959 in Detroit he married the former Ann Gibbons and she preceded him in death on October 19, 2011. In 1989 they moved to the Cadillac area. Frank enjoyed life, gardening, trains and spending time with family and was a very patriotic man. He loved serving God and Country. He is survived by their children: Maria (Tom) Burger of Muskegon, Gary Geranen of Traverse City, Regina Barnes (Earl Clark) of Manton, Joseph (Mary) Geranen of Kingsley, Marquerite (Fred) Dorrell of Broken Arrow, OK, Roseann (Michael) Watkins of New York, Michael (Emily) Geranen of Little Rock, AR, and Christine (Darrin) Lonas of Cadillac; 23 grandchildren; 2 great grandchildren with 2 on the way; two sisters, Connie Sarya of Traverse City and Marjorie â€œMargeâ€ (Jerry) Presley of Ormond Beach, FL and a sister in law, Marguerite Giusti of Rhode Island. The Mass of Christian Burial will be held 11:00 a.m. Monday, November 26, 2012 at St. Ann Catholic Church in Cadillac with Reverend Craig Haider as celebrant. Burial will be at Mount Carmel Cemetery in Cadillac with full military rites under the auspices of the Cadillac Area Honor Guard. Friends may meet the family Sunday from 5-7 PM at the Peterson Funeral Home in Cadillac. The rosary will be prayed at 7:00PM Sunday evening. Memorial contributions may be made to the Wounded Warrior Project. An online guestbook is available at www.petersonfh.com.

Franklin D. Geranen of Cadillac passed away Tuesday, November 20, 2012 at his home. He was 79. He was born November 21, 1932 in Lake Norden, South Dakota to Oscar William and Mamie (Isaacson) Geranen and they preceded him in death. Frank attended... View Obituary & Service Information

The family of Franklin D. Geranen created this Life Tributes page to make it easy to share your memories.

Send flowers to the Geranen family.