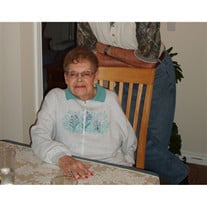 Genevieve Gabier of Mesick peacefully passed away Monday afternoon, March 24, 2014 at the Curry House Assisted Living in Cadillac. She was 89. She was born April 21, 1924 in Monroe Center, Michigan to Edward Arthur and Rosa (Bartz) Spangler. Genevieve graduated valedictorian from Kingsley High School and went on to Bookkeeping School in Traverse City. She worked as a bookkeeper in Traverse City for five years before marrying Otto L. Gabier in 1950. Once married, she worked with him in the dairy plant until 1962. They then went into the Insurance business purchasing the Hilton Agency in Mesick, now known as Gabier/Gaylord Agency. She worked there until quitting in 2009. She enjoyed crocheting, gardening, knitting, deer hunting and traveling. Her favorite holiday was Christmas, when the family she loved so dearly was gathered together. She is survived by her son, Craig (Nancy) Gabier of Mesick; step daughter, Janet Gabier of Clarkston; step son, Wells (Barb) Gabier of Juneau, Alaska; two grandchildren, Shane Gabier (Chris Peters) of New York City and Montel (Eric) O'Connor of Birmingham, AL; five great grandchildren: Sade', Vienne, Symone, Sawyer and Kennedy; Donna Valdez (mother of Shane and Montel) of Byron Center, Michigan; brother, Calvin (Willow) Spangler of Grawn; brother in law, Eli Haywood; sister in law, Carol Spangler and very special friends Jane Williams and Linda Szegda. She was preceded in death by a sister, Lucille Haywood and a brother, Clyde Spangler. Funeral services will take place 2:00 p.m. Saturday, March 29, 2014 at the Peterson Funeral Home in Cadillac with close family friend Ronald Ford presenting the remembrance of Genevieve. After Mr. Ford's presentation, anyone that would like to share a memory about Jennie may do so or if you would rather give Mr. Ford a written memory, he would read it for you. Friends may meet the family Friday from 5-7 p.m. at the funeral home and one hour prior to the service. Her final resting place will be in Monroe Center, Michigan. Memorial contributions may be made to the Mesick Rescue Squad. An online guestbook is available at www.petersonfh.com.

Genevieve Gabier of Mesick peacefully passed away Monday afternoon, March 24, 2014 at the Curry House Assisted Living in Cadillac. She was 89. She was born April 21, 1924 in Monroe Center, Michigan to Edward Arthur and Rosa (Bartz) Spangler.... View Obituary & Service Information

The family of Genevieve Gabier created this Life Tributes page to make it easy to share your memories.

Send flowers to the Gabier family.