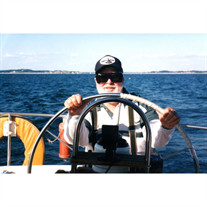 Gerald A. "JerryÃ¢â‚¬Â Doherty of Cadillac passed away Tuesday, April 15, 2014 at his home. He was 81. He was born April 8, 1933 in Petoskey to William A. and Jessie H. (Stokes) Doherty and they preceded him in death. He married the former Wanda R. Belmar on March 9, 1957 in Petoskey and she preceded him in death on December 18, 1988. When Jerry was younger he worked at a golf course and also worked on the construction of the Hoover Dam. He joined the Army National Guard in Idaho and was honorably discharged to the United States Navy. After his service in the Navy Jerry was a milkman in the Walloon Lake area. He attended Ferris Institute for two years before working for Retail Credit. He owned and operated the Laundromat in Manton for many years. Jerry retired from the Secretary of State after serving 23 years as a Relief Manager all over the state. He enjoyed fishing, spending time on the water, reading and tractor rides and walks with his grandchildren. He had a great sense of humor and was dearly loved and will be dearly missed. He is survived by his children: Thomas (Micki) Doherty of Barryton, Michigan, Kathleen Ryder (Mike Kamptner) of Cadillac and Kimberly Homminga of Traverse City; seven grandchildren; three great grandchildren; in laws, Betty Doherty of Petoskey and Jerry Belmer and his son, John, of Muskegon; several nieces, nephews and cousins and special friends Jan Enser, Louis and Bob Holly. In addition to his parents and wife he was preceded in death by a brother, Jim Doherty and two sisters, Louise Leismer and Pat Brennan. Funeral services will be held 11:00 a.m., Saturday, April 19, 2014 at the Peterson Funeral Home in Cadillac with Reverend Thomas M. Doherty officiating and full military rites under the auspices of the Cadillac Area Honor Guard. Friends may meet the family one hour prior to the service. His final resting place will be Greenwood Cemetery in Petoskey. Memorial contributions may be made to Wexford County Council on Aging. An online guestbook is available at www.petersonfh.com.

Gerald A. "JerryÃ¢â‚¬Â Doherty of Cadillac passed away Tuesday, April 15, 2014 at his home. He was 81. He was born April 8, 1933 in Petoskey to William A. and Jessie H. (Stokes) Doherty and they preceded him in death. He married the former Wanda... View Obituary & Service Information

The family of Gerald A. "Jerry" Doherty created this Life Tributes page to make it easy to share your memories.