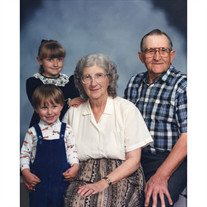 Grand Rapids - Hellen Maxine Wirth passed away peacefully with her children at her side on March 24, 2011 at Faith Hospice in Byron Center. She was 86. She was born on October 14, 1924 in Cadillac to Samuel Dallas and Helen (Kephart) Belden and graduated from Cadillac High School in 1943. Following high school she attended Valparaiso Technical Institute (Indiana) and earned her Radio Telephone Operator License. She worked at Cadillac WATT as an announcer for a couple of years before being employed with Michigan Bell Telephone, where she was the supervisor of the business office when she left Michigan Bell in 1959. She also worked as a clerk at the LeRoy post office for more than ten years before retiring about 1981. She was married November 7, 1954 at the Selma Street Methodist Church in Cadillac to Arthur Webster Wirth, who passed away on November 4, 2010. The couple lived together on a farm in LeRoy for over 50 years. They moved to Meadowview senior citizen apartments in Reed City in 2005. Her hobbies included growing flowers, sewing, canning and baking. She loved family gatherings, visiting friends, reminiscing about past times and spending time with her grandchildren. She was a lifelong member of the Methodist Church and spent many happy hours participating in and volunteering at church activities. Her church family meant the world to her. She is survived by her son Paul (Susan) Wirth of Ada; daughter Patricia Wirth (Douglas Whalen) of Springfield, VA; and grandchildren, Katherine Wirth, Andrew Wirth, Laura Whalen and Matthew Whalen. She was preceded in death by her parents. Funeral services will be held 11:00 a.m., Friday, April 1, 2011 at the LeRoy United Methodist Church with Pastor Jodie Flessner officiating. Burial will be at Maple Hill Cemetery in LeRoy. Memorial contributions may be made in her name at the LeRoy United Methodist Church and envelopes are available at the Peterson Funeral Home in Cadillac where friends may call on Thursday, March 31, 2011 from 2 to 4 p.m. and 6 to 8 p.m. An online guestbook is available at www.petersonfh.com.

Grand Rapids - Hellen Maxine Wirth passed away peacefully with her children at her side on March 24, 2011 at Faith Hospice in Byron Center. She was 86. She was born on October 14, 1924 in Cadillac to Samuel Dallas and Helen (Kephart) Belden... View Obituary & Service Information

The family of Hellen Maxine Wirth created this Life Tributes page to make it easy to share your memories.

Send flowers to the Wirth family.