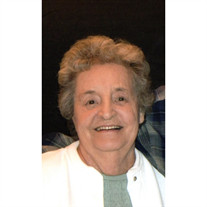 Iliene Joyce Nelson of Tustin passed away Tuesday, August 5, 2014 at Spectrum Health Blodgett Campus in Grand Rapids. She was 77. Mrs. Nelson was born January 22, 1937 in Comstock Park, Michigan to Allen Curtis and Frances Marion (Bartholomew) Miller. Mrs. Nelson graduated from Leroy High School. She worked as a cook in the Pine River School District for 20 years. She loved making homemade sweet rolls and pizza for the students. Mrs. Nelson enjoyed sharing her cooking and baking with others. Her greatest joy in life was watching her grandchildren participate in sporting events and musical performances. She also enjoyed spending time riding her John Deere mower and snowmobiling in the past. Mrs. Nelson was an avid Tigers fan and enjoyed wintering in Florida for the last 20 years. Most of all she enjoyed being a loving wife, mother and grandmother and friend to many. On September 24, 1954, almost 60 years ago, in Ashton, Michigan she married Lawrence V. "CobbÃ¢â‚¬Â Nelson and he survives her along with their children: Jerry Nelson (Christina Pscodna), Mike (Brenda) Nelson, Marv (Roberta) Nelson, Steve (Cindy) Nelson and Bob (Brenda) Nelson all of Tustin; grandchildren: Lindsay, Miranda, Chelsea, Christie, Skyler, Kassy, Sheree and Connor; a great grandchild, Emmett and siblings: Lawrence (Norma) Miller of Florida, Nancy Eastway of Cadillac, Carl Miller of Evart and Roger (Robyn) Miller of Leroy. She was preceded in death by her parents; stepfather, Karl Mehl and brother in law, Elmer Nelson. Funeral services will be held 11:00 a.m. Friday, August 8, 2014 at the Peterson Funeral Home in Cadillac. Friends may meet the family Thursday from 5-8 p.m. at the funeral home. Burial will be at Dover Township Cemetery in Lake County. Memorial contributions may be made to the Luther Lions Club. An online guestbook is available at www.petersonfh.com.

The family of Iliene Joyce Nelson created this Life Tributes page to make it easy to share your memories.

Send flowers to the Nelson family.