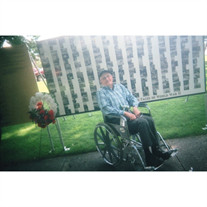 Jack William Christensen passed away Friday, October 21, peacefully at home with his loving family at his side. He was 88. He was born to William J. and Josephine (Marvin) Christensen on September 11, 1923 in Cadillac, where he lived all his life. On February 18, 1946 he married the former Helen Nelson in Cadillac, who survives him. He had worked at Kenwood Park through the NYA from age 16 until he was drafted at age 18. He then served three years in World War II. He returned home and worked in the foundries until 1968. Following that he worked at Mercy Hospital in housekeeping until his retirement in 1985. Jack loved music; in his younger days he loved to sing and play guitar. He was an avid reader and was known for his gentle ways and sense of humor. His children and grandchildren loved to hear his stories about his adventures with Davy Crockett. Most all Jack loved his family. He is survived by his wife of 65 years: Helen; children: Linda (John) Johnson of Cadillac and William Christensen of Traverse City; grandchildren: Jenny Boolman (Linda Baynes), Tracy Lehr (Tim Haysmer), William Christensen II, Sara Christensen (Mark Hughes); great-grandchildren: Katie Boolman (Chris Warnock), Tyler Boolman, Joshua Lehr, Lindsey Lehr, Megan Robertson; great- great- grandson and namesake: Aiden Jack- Allan Jarvis; brother: Gary (Darlene) Christensen and brother in law: Ken Rudolph. He was preceded in death by an infant granddaughter: Jill Christensen, his parents, a sister: Fern Rudolph, his mother and father in law, two sister in laws and seven brother in laws. Funeral services will be held 11:00 AM Tuesday, October 25, 2011 at the Peterson Funeral Home in Cadillac with Chaplain Ed Gilbert officiating. Burial will be at Cherry Grove Township Cemetery in Wexford County. Friends may meet the family from 6-8 PM Monday at the Funeral Home. Memorial contributions may be made to the family. An online guestbook is available at www.petersonfh.com

Jack William Christensen passed away Friday, October 21, peacefully at home with his loving family at his side. He was 88. He was born to William J. and Josephine (Marvin) Christensen on September 11, 1923 in Cadillac, where he lived all his... View Obituary & Service Information

The family of Jack William Christensen created this Life Tributes page to make it easy to share your memories.

Send flowers to the Christensen family.