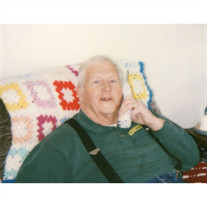 James S. â€œBig Jimâ€ Mort of Mesick passed away Wednesday, May 30, 2012 at his home. He was 80. He was born on May 28, 1932 in Port Huron, Michigan to Wilson J. & Priscilla M. (Grenier) Mort and they preceded him in death. Mr. Mort had served as a Lieutenant on the Fort Gratiot Fire Department for 17 years. He was also employed by Blarney Castle Oil Co. for over 30 years. He liked to tinker with his tractors and also do a little farming with his special friend, Todd Hoskins. As a young man he raced stock cars in Sarnia, Ontario, Canada and still enjoyed racing and watching NASCAR. He loved to hunt and fish and was a life member of the Buckley Old Engine and Thrasher Club. On October 21, 1972 he married the former June (Slayton) Peer where they lived in Mesick and enjoyed combining their family of 10 children including: Jeffrey Mort of Cadillac, Jimmy Mort of Mesick, Terry Peer (Sandy Vanortrick) of Cadillac, Scott (Tammy) Peer of Traverse City, Robert (Gail) Peer of Mesick, Kathi (Mark) Rees of Cadillac, Debbi Calmeyn of Greenville, Stephanie Webber of McBain and Ellie (Ed) Roussain of Mesick; 20 grandchildren; 40 great grandchildren; 1 great-great grandchildren; special friends: Dave Nyman, Jerry Smith, Todd Hoskins, Scott Brown and Kristie Brown. In addition to his parents he was preceded in death by 2 sisters: Grace Harvey and Barbara Simpson, a daughter, Angela (Peer) Denune, his mother and father in law and a brother in law, Robert Slayton. Funeral services will be held 11:00 AM Saturday, June 2, 2012 at the Peterson Funeral Home in Cadillac with Reverend Bruce Rose officiating. Friends may meet the family at the funeral home from 5-7 PM Friday (today). Memorial contributions may be made to the Buckley Old Engine and Thrasher Club. An online guestbook is available at www.petersonfh.com.

The family of James S. â€œBig Jimâ€ Mort created this Life Tributes page to make it easy to share your memories.