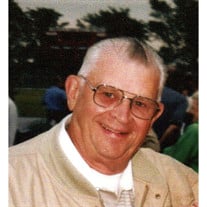 James Edward Brooks died Saturday, August 10, 2013, at Lakeview Manor. He was 86. He was born May 30, 1927, in Cadillac, to Pearl and Merle (Mosher) Brooks. He married Lorraine Henwood on September 11, 1948, in Cadillac, Mich. Together they raised two sons and were married for almost 65 years. Jim graduated from Cadillac High School in 1945 and then served in the Navy in 1945 and 1946. He was employed by Consumers Power Company for 31 years, retiring in 1983. He enjoyed many activities including hunting, fishing, bowling, golfing, gardening, traveling, helping others, and playing cards with friends and family. He is survived by his wife, Lorraine (Henwood) Brooks, son Steve (Elaine) Brooks of Cadillac, and their children: Mark, Chad (Katie), and Scott, and son Greg (Kimberly) of Lake City, and their children: Jessica (Jason) Klimp and Megan. He is also survived by 6 great grandchildren: Adeline, Emilia, and Tate Brooks and Elsie, Decklin, and Thatcher Klimp. Jim lived a long, full life, with his family and friends being very important to him. Jim was preceded in death by his parents Pearl and Merle Brooks and his sister Virginia Anderson. A memorial visitation will be held from 4 to 7 p.m. on Wednesday, August 14, at Peterson Funeral Home, 205 E. Cass Street, Cadillac. His final resting place will be Maple Hill Cemetery. In lieu of flowers, memorial contributions may be made to the American Heart Association. An online guestbook is available at www.petersonfh.com.

The family of James Edward Brooks created this Life Tributes page to make it easy to share your memories.

Send flowers to the Brooks family.