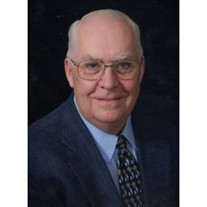 James Earl Geeseman, of McBain, passed away on Wednesday, July 4, 2012, at the Downtown Campus of Spectrum Health Care due to complication of a chemo treatment. He was 68. He was born on October 2, 1943, at Cadillac to William H. and Helen Marie (Barber) Geeseman. He married Jill Rogers on March 20, 1971, in Reed City at the St. Paul Lutheran Church. He had attended the Lake Superior College for two years and had been manager of Western Industries and been purchasing agent for Western Conrete Company, where he had worked for over 30 years. He later had worked at Lake City Redi-Mix and retired in 2009. He was a very active member of the St. John Lutheran Church at Lake City, where he had been the church treasurer for almost 30 years and had been on the council for many years. He enjoyed mowing the lawn and riding and working with his tractors. He had also enjoyed hunting. He was a husband and father and was their best friend. He is survived by his wife, Jill Geeseman of McBain; children, Katie (Ryan) Hughes of Grand Rapids, Jim Geeseman of McBain, Bill Geeseman of Cutlerville; siblings, Gaylia (Don) Anger of Midland, William (Lorna) Geeseman of Cadillac and The Villages in Florida, Judy (Harold) Sutter of Reed City, Carol (Bob) Sandelius of Cadillac, and Richard (Karen) Geeseman of McBain; sister-in-law, Beth (Dale) Stanton of Moorestown, Tenn.; nieces and nephews and their children, Amie (Brent) Ruppert and Grant and Lane of Luther, Julie Churchhill and Logan and Lucas of Cadillac, Lori Anger of Midland, Lisa Noack and Becca and Brett of Midland, Jeff (Linda) Geeseman and Jacob (Jessica) Geeseman of Cadillac, Patti (Brian) Cote and Aden and Alec of Rockford, Lynn (Jeff) Jordan of Cadillac, Darold Sutter of Reed City, Jere Geeseman of McBain, Joy Geeseman of Cadillac, Jamie Geeseman of McBain, Kellie (Jason) Roderick of Cadillac, Kari Brastram-Parks and Kayson and Kyler of Cadillac, and Katie (Matt) Leusby and Brooklyn and Madison of Big Rapids. He was preceded in death by his parents, infant sister Joy Geeseman, sister-in-law Judy Geeseman, and second parents Verl and Dora Cramer. Funeral services are 11 a.m. Saturday, July 7, 2012, at the St. John Lutheran Church in Lake City with the Rev. John Mayer officiating. Burial is Mount View Cemetery at McBain. Visitation is 2 to 4 p.m. and 7 to 9 p.m. on Friday, July 6, 2012, at the Burkholder Funeral Home in McBain, and one hour prior to services at the church. Memorial contributions may be made to the church. A guestbook is available at www.petersonfh.com.

James Earl Geeseman, of McBain, passed away on Wednesday, July 4, 2012, at the Downtown Campus of Spectrum Health Care due to complication of a chemo treatment. He was 68. He was born on October 2, 1943, at Cadillac to William H. and Helen... View Obituary & Service Information

The family of James Earl Geeseman created this Life Tributes page to make it easy to share your memories.

James Earl Geeseman, of McBain, passed away on Wednesday, July...

Send flowers to the Geeseman family.