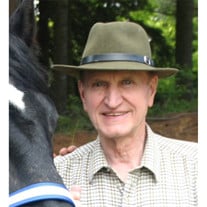 Jerome Gunther Schwartz of Tustin, Michigan fell asleep in Jesus January 7, 2022. Jerry would have turned 90 years old February 4, 2022. As a child he was raised by his grandmother in Germany, where he experienced the horrors of World War II first hand; including limited food, no shoes and bombing attacks. He was sent to live with a host family on a farm for a period of time in order to escape the regular bombings occurring in his home city of Bremerhaven. During this country respite he learned to appreciate rural living which continued throughout his life with a love of horses and gardening. Jerry has shared many stories of his childhood under these difficult times and when talking with him people were always amazed at his resilience and optimism. After the war he returned to New York City and due to anti German sentiments took the first name Jerome instead of his childhood name of Gunther. He spent time with his family in their small Manhattan apartment or in the family's Catskill Mountains cabin during the summers. He always had a strong work ethic and from his teenage years worked hard. A woman who lived in his apartment building was instrumental in changing his life. She was a Godly woman who wanted to help this immigrant family and would bring him clothing and other needed necessities. Upon finishing high school, she suggested that he attend Atlantic Union College (AUC), a Seventh day Adventist institution. It was at AUC that he was able to pursue a degree in teaching which had been his heart's desire since a child. Here he made several lifelong friends and most importantly he became a believer in Jesus Christ. His faith became the core of his life and he was a faithful believer in Jesus until the time of his death. During college he was drafted into the Korean War and served as an army medic. He was very proud of this service and frequently stated that, "there is no country more wonderful than the United States.Ã¢â‚¬Â He felt there was nowhere else that someone like he, from a poor immigrant family, could have such freedom- to worship, and to pursue any chosen career path thus making a life of their choosing. Jerry met the love of his life, Linda, while pursuing a master's degree in education at Andrews University in southern Michigan. His career journey was from teacher to principal and then superintendent. He was Superintendent of Marion Public Schools for 31 years. When he retired in May of 2004 at the age of 72, he was one of the longest serving Public School superintendents to remain in one district in Michigan history. He felt this was a great honor. He loved the community of Marion, Marion Public Schools, his staff and students. He was a member of the Marion Seventh Day Adventist church and then after retirement joined the Cadillac Seventh Day Adventist church where several of his children attend. He volunteered for several nonprofit organizations including a mission to Mexico and Strong Tower Radio based in Cadillac. In retirement he enjoyed volunteering to drive patients all over the state for medical care. His greatest joy came from his family. He looked forward to family get togethers especially Christmas time with his family. He is survived by his wife Linda; four children: Drs. Brian (Lyndi) Schwartz of Ohio, Heidi Schwartz of Wisconsin, Dr. Gunther (Kristi) Schwartz of Tustin and Drs. Cara (Ovidiu) Brinzeiu of Tustin. In addition, he has nine grandchildren and two great- grandchildren. His family looks forward to the resurrection when the dead in Christ will rise and be caught up to rejoin their loved ones and meet their savior Jesus Christ. It is our belief that Jesus is soon to return and we will not be long parted. Funeral services will be held 3:00 PM, Sunday, January 16, 2022 at Peterson funeral and Cremation Services in Cadillac. Visitation begins one hour prior to the service at the funeral home. Burial will be at Sherman Township Cemetery in Osceola County, Monday at 11:00 AM. Memorial contributions may be made to Strong Tower Radio. An online guestbook is available at www.petersonfh.com.

Jerome Gunther Schwartz of Tustin, Michigan fell asleep in Jesus January 7, 2022. Jerry would have turned 90 years old February 4, 2022. As a child he was raised by his grandmother in Germany, where he experienced the horrors of World War... View Obituary & Service Information

The family of Jerome Gunther Schwartz created this Life Tributes page to make it easy to share your memories.

Send flowers to the Schwartz family.