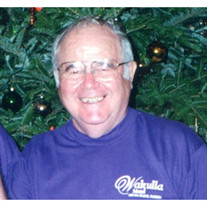 Jerry Lee Cotter of Cadillac died Thursday evening, March 8, 2012 at Lakeview Lutheran Manor after a short illness. He was 80. He was born in McBain on September 25, 1931 to Manley and Ellenore Marie (Nystrom) Cotter and they preceded him in death. He married the former Barbara Delight Ensign on February 16, 1951 in McBain and she preceded him in death on March 28, 1996.\n\nMr. Cotter graduated from McBain Rural Agricultural High School. He later went on to graduate from Davenport University in May 1952. On June 2, 1952 he began to work at the Certified Public Accountant Office of Cramer, Beattie and Nichols, which later became Baird, Cotter and Bishop, in which he was a shareholder/ director. He worked there for over 40 years until retiring in October of 1992. He was an avid golfer, bowler and sports enthusiast. He enjoyed playing cards, watching and attending any and all sporting events, classic cars and cars in general. He thoroughly enjoyed traveling to various places with family and lifelong friends. He was a life member of the First Presbyterian Church of Cadillac and had served in various capacities there. \n\nSurvivors include his children: Gail Cotter of Cadillac, Mike (Kathy) Cotter of Petoskey, Mark Cotter of Cadillac, Lisa Cotter of Cadillac and David (Janice) Cotter of Morrison, Colorado; grandchildren: Kristen Cotter, Matthew Cotter, Chris (DeAnne) Larson, Josh Larson, Braylyn Cotter and Sydney Spangler; a granddaughter in law, Samantha Goldner; great grandchildren: Katelyn, Nevaeh and Peyton; a brother, Dale (Betty) Cotter of Cadillac; sisters: Joyce Kuipers and Joan Berghouse both of Wyoming, Michigan, Carol (Bob) Hiller of Grandville, Sharon (George) VanderHaar o f Byron Center and in laws, Gilbert (Pauline) Ensign of Oregon and Ellen (Victor) Kline of Cadillac. \n\nIn addition to his parents and his wife he was preceded in death by a son, Steven in 1959 and a grandson, Tyler Cotter in 2009 and 2 brother-in-laws: Hubert Berghouse and Norm Kuipers.\n\nFuneral services will be held 11:00 AM Tuesday, March 13, 2012 at the First Presbyterian Church with Reverend Paul Tomlinson officiating. Burial will be at Maple Hill Cemetery in Cadillac. Friends may meet the family from 6-8 PM Monday at the Peterson Funeral Home in Cadillac. Memorial contributions may be made to First Presbyterian Church or Parkinson\'s Association. An online guestbook is available at www.petersonfh.com. \n

Jerry Lee Cotter of Cadillac died Thursday evening, March 8, 2012 at Lakeview Lutheran Manor after a short illness. He was 80. He was born in McBain on September 25, 1931 to Manley and Ellenore Marie (Nystrom) Cotter and they preceded him in... View Obituary & Service Information

The family of Jerry Lee Cotter created this Life Tributes page to make it easy to share your memories.

Send flowers to the Cotter family.