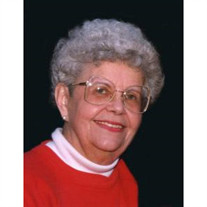 CADILLAC - Joanne Dunham Harvey, a lifelong Cadillac resident, died Saturday, February 18, 2012, at Mercy Hospital. She was 86. She was born on November 9, 1925, to Merritt M. and Lucile (Dunham) Haynes. She graduated from Cadillac High School and attended Michigan State University. She received her L.P.N. degree from Mercy School of Practical Nursing, an A.D.N. from Ferris State College, and a B.S.N. with honors from the University of Michigan. She was promoted to Director of Nursing at Mercy Hospital of Cadillac in 1979, having been a nurse at the hospital since 1970. Prior to that, Joanne was a bookkeeper for the family-owned and operated Haynes Brothers Lumber Company. She ended her working career as a part-time Family Support Coordinator for North Central Community Mental Health and part-time Assessment Nurse for Northwest Senior Resources. She valued education, serving on the Cadillac Area Public School Board for 18 years, Wexford-Missaukee Intermediate School Board for 20 years, and the Michigan Association of School Boards for 11 years. She received a distinguished service award in 1983 in recognition of her meritorious service in the cause of public education. Using her nursing skills, Joanne volunteered for the Red Cross Disaster Committee. She served during a dozen national disasters, from hurricanes in Puerto Rico and Florida to floods in North Dakota. In 2003, she was given a commendation for her 20 years of service in disaster, blood, and nursing services, and received a Service Award for â€œextraordinary contributions to the American Red Cross above and beyond the call of duty.â€ With a strong commitment to helping others, Joanne did volunteer work for the Wexford-Missaukee County Family Independence Agency, Hospice of the Wexford-Missaukee Area, United Way of Wexford County, Special Olympics, and Regional Interagency Coordinating Council. Joanne was an honoree at the 1998 Celebrate Women luncheon, a benefit for the Cadillac Area Oasis Family Resource Center. Project Christmas was always one of her favorite endeavors, and she and her husband Cliff traveled many miles delivering meals on wheels to seniors. Joanne also participated in the STAR Breast Cancer Prevention Clinical Trial after her sister\'s battle with breast cancer. Joanne was preceded in death by her husband of almost 65 years, Clifford G. Harvey, and her sister, Mary M. Terrell. She is survived by their four children, Pat (Leo) Paveglio of Cadillac; Sue Hopkins of Oregon; Steve (Nancy) Harvey of Georgia; and Richard (Marcia Calkin) Harvey of Harrietta; eight grandchildren; four great-grandchildren; sister-in-law, Evelyn M. Falan; and numerous nieces and nephews. A memorial service will be held at the First Congregational Church, 201 Harris St., in Cadillac, at 11 a.m., on Saturday, March 10, 2012. Visitation will be at the church from 9:30 a.m. until the service begins. Memorial contributions may be made to Project Christmas through Love, Inc., P.O. Box 554, Cadillac, MI 49601; Red Cross Disaster Relief; or the Cadillac Area Oasis Family Resource Center. Arrangements were made by the Peterson Funeral Home in Cadillac. An Online guestbook is available at www.petersonfh.com.

The family of Joanne Dunham Harvey created this Life Tributes page to make it easy to share your memories.

Send flowers to the Harvey family.