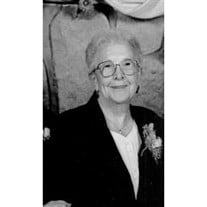 LUCAS - Johanna Smits, formerly of Lucas, passed away on Sunday, August 28, 2011, at the Brook Assisted Living facility in Cheboygan. Johanna was born April 3, 1921, the youngest of six, to Rena (Grashuis) and Peter Elenbass in Richland Township, Lucas. Johanna spent much of her youth in Lucas, with a couple of stints in Grand Rapids. She married Edward Samuel Smits on November 1, 1940. They were the first couple married in the new Rehobeth Reformed Church of that time in Lucas. He preceded her in death in September of 2005. Johanna was a devoted homemaker, wife and mother. She very much enjoyed her home, family and her church. Some of her hobbies included gardening, golfing, baking and crocheting. She crocheted afghans for all of her grandchildren. She was a member of the Rehoboth Reformed Church in Lucas. Survivors include one sister, Christena Taylor, of Cadillac; one son, Michael (Cindy) Smits, of Upland, Calif.; two daughters, Barbara (Bud) Darnell of Cheboygan and Beth (Cleo) Franco of Mason; daughter-in-law, Pam Smits of Cadillac; grandchildren, Darcy (Carl) Traynor of Lake Forest, Ill., Kathleen (Rob) Garland of Suwannee, Ga., Laurin (Julie) Darnell of San Antonio, Texas, Chad (Amanda) Smits of Wyoming, Rachel (Taylor) Williams of Katy, Texas, Rena Franco of Royal Oak and Chrissy Franco of Philadelphia, Pa.; seven great-grandsons and one great-grand daughter. Johanna was preceded in death by her parents; one son, Edward Daniel Smits; two brothers, Ivan and Gerrit Elenbaas; two sisters, Marie Bazuin and Kate Lucas; a nephew, Dean Lucas; and a niece, Pearl Tacoma. The funeral service will take place at 11 a.m. on Thursday, Sept. 8, 2011 at Rehobeth Reformed Church in Lucas, with Rev. Dave Sterk officiating. Burial will take place at Lucas Cemetery. In lieu of flowers, memorial contributions in Johanna\'s name may be directed to Rehobeth Reformed Church. Arrangements were made by the Burkholder Funeral Home in McBain. A guestbook is available at www.petersonfh.com.

LUCAS - Johanna Smits, formerly of Lucas, passed away on Sunday, August 28, 2011, at the Brook Assisted Living facility in Cheboygan. Johanna was born April 3, 1921, the youngest of six, to Rena (Grashuis) and Peter Elenbass in Richland Township,... View Obituary & Service Information

The family of Johanna Smits created this Life Tributes page to make it easy to share your memories.

LUCAS - Johanna Smits, formerly of Lucas, passed away on Sunday,...

Send flowers to the Smits family.