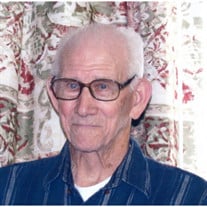 John Raymond Smith of Cadillac passed away Wednesday, January 16, 2013 at The Lakeview in Cadillac. He was 95. John liked to say that on a cold and snowy Ground Hog's day, February 2, 1917 he was born in Cadillac to Allie and Alna (Gilbert) Smith. He attended the one room Dayhuff and Enterprise grade schools near Meauwataka and then graduated from Cadillac High School in 1934. On September 25, 1940 John married the former Eleanor H. Stanton who preceded him in death on December 25, 1997. John began employment with the Kysor Heater Company as a crate maker in the shipping department in 1940. He worked his way up, retiring as a journeyman tool and die maker in 1979. John had been an active member of the First Church of the Nazarene in Cadillac for over 65 years. In his retirement he continued to machine and make many items of wood and steel. He was proud to have made and given away over 300 wooden step stools and paper towel holders. John is survived by his children Barbara Schwanik of Cadillac, Neil (Diane) Smith of East Lansing and Janet Carrier of Portland, Oregon; Grandchildren: James (Janet) Mattison, Jr. of Cadillac, Caren (Steve) Anderson of Tustin, Jill (Kyle) Walters- Sheaffer of Portland, Oregon, Nancy (Mike) Lubeski of Marana, Arizona, Laura (Mandar) Dighe of Portage and Holly (Marc) Parich of Washington, D.C.; 10 great grandchildren and 5 great- great grandchildren. He was preceded in death by his wife, Eleanor; son, Lyle; mother and father; infant brother, Dale and sister, Jean Berg. A special thanks to caregivers, Carolyn Brintnell, Barbara VanConant, Becky Ward, Casey and the staff and caregivers from Wexford County Council on Aging and Area Agency on Aging of Northwest Michigan; Diane Cooper and the wonderful staff at Daybreak Adult Foster Care; and the caring staff of The Lakeview. Memorial services will be held 2:00 p.m. on Groundhog's Day, Saturday, February 2, 2013, (which would have been his 96th birthday) at the First Church of the Nazarene in Cadillac with Reverend Frank LaLone officiating. A visitation with the family will be held from noon to 2:00 p.m. at the church. His final resting place will be Antioch Township Cemetery in Wexford County. In lieu of flowers memorial contributions may be to the Wexford County Council on Aging. An online guestbook is available at www.petersonfh.com.

John Raymond Smith of Cadillac passed away Wednesday, January 16, 2013 at The Lakeview in Cadillac. He was 95. John liked to say that on a cold and snowy Ground Hog's day, February 2, 1917 he was born in Cadillac to Allie and Alna (Gilbert)... View Obituary & Service Information

The family of John Raymond Smith created this Life Tributes page to make it easy to share your memories.

Send flowers to the Smith family.